In the Beginning: Pickwick & Frolic

Just 400 lineal feet of narrow alleyway spurred the renaissance of Cleveland's downtown party scene. (Of course it had the help of two professional sports team venues opening in the preceding decade, and a long pent-up demand.) Connecting Prospect Avenue with Euclid Avenue just block's from Public Square — the City's beating heart — East 4th Street was long an unremarkable short-cut roadway for aimless occasional traffic. However, its redevelopment as a pedestrian-only thoroughfare has over the past decade and more re-energized the city's nightlife.

Initial impact was felt by late 2002, as the multi-venue Pickwick & Frolic Restaurant & Club opened onto East 4th. In fact home to five different venues — a cocktail lounge/bar, a small-hall swing & jazz cabaret, a martini bar, a comedy/improv club, and a restaurant offering a varied rustic American menu — Pickwick & Frolic anchored the northerly end of East 4th, within a structure that once housed an opera house in the late 1800s. The facility has for almost two decades consistently drawn both natives and tourists alike.

The House of Blues

Across East 4th Street from Pickwick & Frolic, and wrapping around to a Euclid Avenue frontage is Cleveland’s House of Blues. Opening in 2004 in a remodeled former Woolworth’s, The House of Blues brought nearly nightly live music acts back to an intimate club setting in the heart of the city. It also brought its typical collection of fine American folk art and great southern cuisine. The House of Blues also serves up a sumptuous Sunday gospel brunch, and its members-only Foundation Room offers another level of comfort and luxury for a more private getaway.

Most of the block length of East 4th has been converted into a brick-paved pedestrian way, with overhead light strands, patio dining, and punctuations of plantings, art, awnings and neon. (Heavily used valet parking, accessible from Prospect Avenue, serves many of the available clubs, pubs and restaurants.)

Studding the street are many restaurants, bars and clubs, serving a cosmopolitan and eclectic range of tastes. Flannery’s Pub serves up casual Irish fare, accompanied by a range of brews, ales and stouts, and a dash of music. Lola’s, an eatery launched by renowned chef Michael Symon, wins raves for its exotic desserts and unique menu. Chinato by Zack Bruell is a high-end favorite. Saigon carries a mix of Vietnamese dishes with hints of France, China, and Thailand. Zocalo Mexican Grill & Tequileria caters to those with South-of-the-Border cravings. Other venues include Red: The Steakhouse, Mabel's BBQ, The Butcher and The Brewer, J. Gumbo's, Jimmy John's, and the Erie Island Coffee Company.

But East 4th is also truly a vibrant and walkable mixed-use neighborhood. The Bang and The Clatter is an innovative theater company, while the Corner Alley provides 16 bowling lanes coupled with several bars and a restaurant. Condo and apartment living are available at five different properties along East 4th Street and onto adjacent streets, each offering its own particular mix of location, price, amenities and appeal. 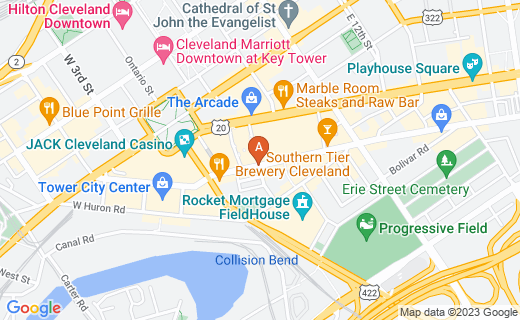 Enter the valet parking from Prospect Avenue, or simply stroll to East 4th after a Tribe or Cavs game.

Near Everything That Matters

The East 4th Neighborhood (or, as marketing hype would have it, the 'East 4th Experience') of course benefits greatly from its heart-of-it-all location, and the proximity of other great civic amenities. The offices, shopping and transit assets of Tower City Center are but a 5-minute walk away, as are the venues of Rocket Arena (formerly Quicken Loans Arena, and still home of The Cleveland Cavaliers NBA team) and Progressive Field (formerly Jacobs Field, and still home of The Cleveland Indians MLB team). Cleveland's recently re-imagined 'front lawn of Public Square is but a few blocks away. Hotels including The Ritz-Carlton, Renaissance Cleveland, and Marriott at Key Center are all within walking distance. The majority of East 4th Street's initial resurgence has been product of the local firm of MRN Development.