Puerto Rico is an awesome unincorporated territory of the United States. Officially the Commonwealth of Puerto Rico. This island is located in the Northeastern Caribbean, East of the Dominican Republic, and West of both Virgin Islands and the British Virgin Islands.

Being born in Puerto Rico and after visiting each one of its 78 municipalities, since its dimensions are 100 miles long by 35 miles wide. I have found out that in each one, I could live in. I am not infinite, so my real choice has always been the island of Culebra. Let me tell you why...

The first inhabitants on the island were Pre-Taino Indians (500 B.C.). In 1880 colonist from Vieques and Puerto Rico came to the island. Spain ceded Puerto Rico to the US at the end of the Spanish-American War in 1898. In 1901 the Culebra Naval Reservation was established. Culebra Island became the primary gunnery and bombing practice site of the US Navy since the outbreak of WWII, until 1975. The Navy gave over jurisdiction of the protected areas to the US Fish and Wildlife Service.

The municipality of Culebra Island is located to the East of Puerto Rico. Its dimensions are about 7,000 acres including the islets around it. One of the Islets or Cays is Culebrita Island and the others are:

The map below will show you where in this planet this uninhabited island geographically was created and is settled. 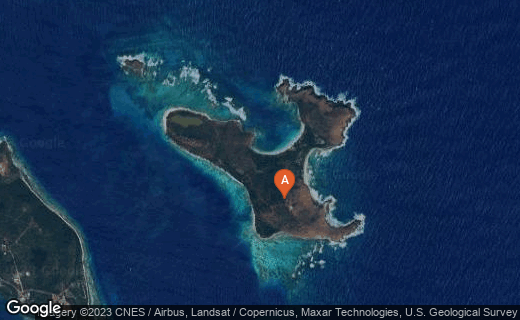 Culebrita Island possesses the oldest lighthouse in the Caribbean, built on September 25, 1882 and completed on February 25, 1886.The Spanish Crown built it as a protection by the reclaiming of Culebra Island.

Culebrita Lighthouse was the oldest operating lighthouse in the Caribbean until 1975 when the US Navy and Coast Guard closed it replacing it with a solar powered light beacon. It used to be the most eastern light outside of Puerto Rico guiding navigation through the Virgin Passage and the Vieques Sound, connecting in the Puerto Rico Light System with the Cape San Juan Light.

This Lighthouse is the only structure found on the island; closed to visitors but may be viewed and photographed from a distance. It offers the majestic views over the island itself, the Culebra Island, Vieques Island, Puerto Rico, and the US and British Virgin Islands in the distance.

The lighthouse is in danger of collapsing. Hurricane Hugo in 1989 and Hurricane Marilyn caused vast damage. No work has been done to maintain the facility. Trying to help the lighthouse since 1994, the Culebra Foundation has tried to get local and federal help without success.

I am making a plead within this article to those that can help and are able to direct the attention to those that, in one way or the other, may give light back to the lighthouse, or at least help it keep standing since: The Culebrita Lighthouse is registered, on October 22, 1981, in the National Historical Monuments of the United States.

How do you get to Culebrita?

After you get to Culebra Island, Culebrita Island is accessible by water taxi or kayak. The only structure established is the lighthouse. Since there are no facilities, you need to bring sufficient drinking water along with something to eat.

US officials have to be informed if you are sailing from the US Virgin or British Islands across to Culebrita and anchoring off the island.

Note the importance of following the policies and regulations established by refuge administration in order to protect the island from visitors.

Culebrita Island has no hotels and no camping is permitted. You may stay on Culebra Island, Vieques, or on the Eastern part of Puerto Rico Island. This is really an adventurous experience; as for me, I choose camping at Culebra and/or staying inside a private boat or yacht. It is also neat to break sleep, admiring the night and receiving the sun as the waves sing a lullaby.

What should you bring along?

Every place has its own dressing fashion, before heading to Culebrita it is recommended to:

Culebrita Island has six beaches.The Northern shores are used to be nested by the critically endangered Leather-back and Hawks-bill sea turtles. It is a unique experience for those that snorkel and dive, since they might carouse with the turtles, rays and schools of colorful fishes.

On the East side of Culebrita you will find the tide pools that trap small sea life and a warm bath for those that enjoy lounging with them.

Culebrita has two shallow lagoons that are important habitats for some of the local wildlife. Both lagoons are bordered on the seaward side by a small mangrove fringe.:

The Culebrita Island is surrounded by astounding reefs.It is necessary to have the knowledge of the fragile attributive that this ecosystem has. Once it breaks, it will repair itself, but will require years to do so.

The Southern side of the island, between Culebrita and Culebra, is where snorkeling is enjoyed.

The general flora is arid to dry species. It has been recorded 97 species.

It has been recorded:Laughing Gulls, Brown Pelicans, White Cheeked Pintail, Sea turtles, Lizards, Snakes, and others:

Why its attractions are breathtaking?

Let me mention why its attractions are breathtaking:

My words were only an introduction to this outstanding island. The real experience is when visitors become part of its breeze, wind, air, water, land.and the enjoyment of the natural life within Culebrita Island.

You are welcome to visit us here in Puerto Rico and travel to Culebrita Island.