Part Europe, part Asia, a buzzing metropolis with a whopping 17 million residents, Istanbul is one of those world cities that really does have an identity all of its own. Strategically positioned as a link between Russia, Europe and the Middle East, Istanbul is bursting with self-confidence and energy and showing enormous economic growth, but it combines all this with old-style warmth, friendliness and immense charm.

We arrived early on the morning of May 1st, and headed for the airport bus that would take us to Taksim Square. From there we were due to take a funicular followed by a tram to Sultanahmet, the old town, where our hotel was based. But today the bus wasn’t going to Taksim Square, we were told. It was Mayday, and there were demonstrations, but the driver would drop us off at Levent. Seeing that this was still on the underground route, this posed no problem. The air was cool and the mist swirled, as we sat on the bus, trying to understand our surroundings. Over a bridge on the Bosphorous – leaving Asia for Europe I thought excitedly – but all we could see was a white-out through the windows. We got off at Levent and my well-travelled partner worried that, especially after an overnight flight, we were vulnerable, and could be in a shanty town riddled with crime for all we knew. Looking for the underground station, I spotted a likely looking set of buildings ahead. I gasped – no shanty town this, it was a Harvey Nichols, an off-shoot of London’s most elegant store. Our first impression was of worrying that we could get mugged, only to find ourselves in the most exclusive and desirable area in town. But Istanbul’s like that – full of pleasant surprises.

You can tell a lot about a people by the way they treat their animals. The French adore their dogs, but take no responsibility for them fouling the streets. Cypriots consider it morally unjust to neuter a cat, but think nothing of running them over. So strong is the Indians’ belief in karma that when New Delhi’s monkey population grew out of control, even killing a minister, they simply introduced an attacking species to deal with them. And Istanbullus? Shortly after our Harvey Nichols revelation, we were waiting for a tram near a café, where an extremely handsome ginger cat was sitting at a table, as if expecting coffee and fresh rolls for breakfast. The owner came along, and I braced myself for the harsh shooing away that would surely follow. Instead, he petted the cat and put down some food for it (in a near flowerbed, not on the actual table). Turning, he caught my eye and we exchanged smiles. He loved the cat. In that instant I decided: I loved Istanbul.

Later, walking through a park, we spotted another cat, sitting in calm contemplation, face pointing towards the sun. A group of men walked past, smiling fondly at it. And during the rest of our week, I noticed simple acts of kindness towards animals everywhere we went: the old man feeding a kitten some milk on a busy shopping street, the couple giving a pack of puppies fresh meat to chew on, piles of cat biscuits left out on pavements… And the cats themselves live without fear, to the extent that they approach you, demanding kindness and cuddles, as if they’ve never experienced a harsh word, or the business end of a size eleven boot, in their lives. In Cihangir, the residential area popular with expats, the streets are full of veterinary surgeries and pet shops. In short, Istanbullus love their four-legged friends, and especially, it would seem, the feline variety.

Surprisingly, there are few cats around on the main harbour, Eminönü, Istanbul’s marvellously busy harbour full of cruise boats, ferries, fishermen on the Galata bridge, and a bunch of floating fish sandwich shops, bobbing alongside the quay. If you don’t mind queuing, for a mere four lira (around £1.50 UK/$2.30 US), you can buy a slab of bread filled with salad and freshly grilled mackerel, and eat it as you watch the boats go past, and all of humanity (remember, there are 17 million of them) getting on with their day to day lives. It’s a wonderful experience.

We took ferries to the Asian suburbs of Kadiköy and Üsküdar, and went on a cruise up the Bosphorous, where I indulged in a little fantasy house-hunting. The sea is an integral part of Istanbul, and there are moments when you feel disorientated: is that bit of land over there Asia or Europe? Is that the Golden Horn, which divides the European part, or the Bosphorous, which divides the two continents? 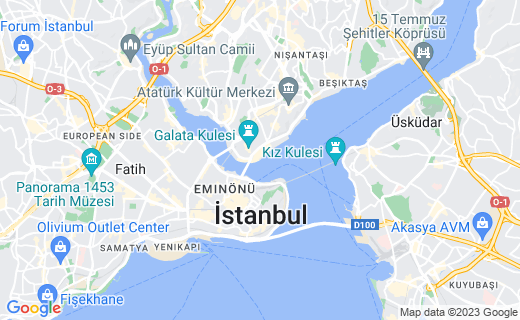 Istanbul is an exciting, mysterious place, full of hints as to what you might find should you cross a certain bridge, or take a certain ferry. And although the Blue Mosque is its most famous, there are mosques everywhere you look, until they become disorientating. The Blue Mosque is the one with six minarets, I kept reminding myself, which means that one’s got to be the New Mosque, (built in the late 16th century), or perhaps the Süleymaniye Mosque, which is actually far more visible.

Of course, everyone gets worked up about the Aya Sofya, otherwise known as the Haghia Sophia (in Greek), the Sancta Sophia (Latin) or the Church of the Divine Wisdom (English). Completed in 565, it was converted to a mosque in 1453 and then turned into a non-denominational museum by Atatürk in 1934. It’s striking and extraordinary, even if, personally, I just can’t get that excited about churches. Another Istanbul landmark is the Topkapi Palace, which we visited on a rainy day, along with just about every other tourist in town. The queues to visit anything were enormous, the lay-out misleading and the architecture nothing really that special. The Basilica Cistern, however, the underground reservoir built by the Byzantine emperor Justinian in 532, was spookily fascinating and well worth the entry fee.

And the shopping, needless to say, was great. First there’s the Grand Bazaar, that sells everything from jewellery to leather, ceramics to carpets, with a whole lot more in between. It’s confusing and busy and exhausting and overwhelming, and, unlike my partner, I loved it. The spice market wasn’t as big or quite as spicy as I’d been expecting, but it’s still well worth a visit. Our hotel was close to the Arasta Bazaar, a small strip of upmarket shops that I came to know quite well. But there are shops everywhere, and after a few days your eyes settle and you start to pick out the things that really appeal, from hand-woven carpets and cushion covers, to semi-precious gem-stones and evil eye amulets, intended to protect the wearer from bad luck.

But I have to say I enjoyed the locals’ Istanbul the best, and catching a ferry or tram to a residential part of town just for a look around. In the easily-pronounced Kocamustafapaşa, for example, a residential area just west of Sultanahmet, we stumbled upon an incredible market, full of fresh produce, and I had one of my many fantasies about living there, and enjoying the simple luxury of fresh fruit and vegetables daily. I pictured myself jumping off and on the trams, funiculars, trains and buses, all of which, by the way, are squeaky clean and amazingly efficient, and becoming a knowledgeable devotee of baklavas and Turkish Delight.

You don’t need to spend much money to eat well in Istanbul, though of course you can, if you really want to. We’d dine on our fishy sandwiches by the harbour or in one of the many, fantastic restaurants serving mezze and grills, and then by early evening we’d steal into our favourite café by the station and order çay, or tea, with our supper substitute, a selection of baklavas and Turkish Delight. On their own they’re too sweet by far for my taste, but knocked back with the sharp, strong tea that’s always served in a glass, they’re delicious.

Usually, after some time away, I start looking forward to going home, and seeing the garden, my ageing cat and to being my own cook again. But not this time. So reluctant was I to leave, my beloved practically had to drag me out of our hotel and onto a tram as I wailed: ‘Do we have to?’. There’s no other city in the world that compares to Istanbul: its location, its pace, its energy and its warmth. For three days on our trip it poured with rain, but in all honesty, nothing could dampen my spirits.