Kyen Campground is the only campground open on the Ukiah side of Lake Mendocino at this time.

Lake Mendocino is located in the Eastern portion of Mendocino County, just East of the city of Ukiah. A large recreational lake, swimming, fishing, and boating are activities offered besides camping and hiking. There are over 300 campsites located at Lake Mendocino, including group sites, walk in (first come, first served) campsites, and boat-in only locations on the far side of the lake (opposite available parking and boat launching sites).

Two hours north of San Francisco, Lake Mendocino was formed in 1958 by the creation of a dam and hatchery-born fish are released at this lake annually by the Department of Fish and Game. The fishing attracts anglers seeking the likes of bass, stripers, blue gill, crappie, and catfish.

Day use options include group sites, barbecue and picnic areas, some with covered seating areas. Campers are mostly of the tent-pitching variety. However, RVers are also welcome and a dump station is available. Evening gates close at 10pm. Current fees are affordable, starting at $25 a night for a tent campsite away from the shore ($30 on the shoreline).

A View From the Highway 20 Side of the Lake

The Native Americans of the Coyote Valley, where Lake Mendocino is located, resided there hundred of years ago. Though they now live on a nearby reservation, the Pomo Indians have a Pomo Cultural Center located on the shores of Lake Mendocino, near the Kyen Campground, where they have an on-site museum and promote their heritage with cultural shows, including Native dances and stories.

Lake Mendocino - At the Junction of Highway 101 and Highway 20 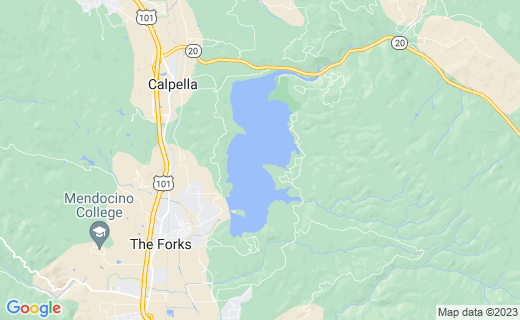 What is most important to you when you camp?

There are three main campgrounds available to choose from at Lake Mendocino: Kyen Campground, Oak Grove Campground, Bu-Shay Campground, and Pomo Day Use Area. (Bu-Shay Campground is located on the East side of the lake, via a separate entrance from the other campsites, boat launch and day use area). The campsites are well maintained, have nearby potable water available and bath houses with non-coin showers and restrooms. Each campsite has an available fire ring with grill, negating the necessity of bringing a barbecue. Visitors will need to buy wood or coals from stores located outside the area managed by the Army Corp of Engineers.

Warning About Camping At Lake Mendocino

Visitors are cautioned that there is a band of almost permanent residents at these campgrounds, some of which create domestic problems for visitors. After camping there once a year each summer, it is a sad fact that there are problem people essentially living at this lake. Though the Army Corp. has a limit of a 14 day duration of stay, these people circumvent this rule by using different people to register. This year, I noticed that the Army Corp. took further measures by separating these people into campsites spread apart from each other. However, this made no difference when these same people were shouting at each other across dozens of campsites (as one must presume they don't have a cell phone?) and not only were they screaming at the top of their lungs, but they were doing so in the middle of the night. My last visit was during the sold-out Fourth of July weekend. This holiday seemed to have no bearing on the situation as a domestic violence issue erupted and no host nor police officer showed up to calm the situation. Finally, another non-resident camper came over to speak to the most drunken and violent of the offenders, managing to talk him down until his was crying very loudly. While I would prefer crying over violence, this did not make for a pleasant experience. As these residents are poor, they tend to stay in the less expensive sites located farther back from the water. Therefore, it's recommended that visitors acquire campsites closer to the shore, though the price may be slightly higher for doing so.

If you really don't want to deal with any virtually permanent campers, try the Bu-Shay Campground on the other side of the lake. There are none of these type of homeless campers on that part of the lake, there is still swimming access, there is a playground, as in the other campgrounds, and RV sites are available.

A Road Through the Campground at Lake Mendocino

Besides those of the aquatic type, the animals residing near the lake are mainly small creatures: squirrels, raccoons, lizards, birds. However, deer sometimes come through and a bear has been known to very infrequently visit. There are no bear boxes at this site and no recommendations for food storage. However, knowing that bears typically frequent people-inhabited campsites when hungry, experienced campers leave food a good distance away from their tent and outside their car, to avoid the potential for car damage if the bear decides to enter it for food - with or without a key.

Did you know that Cape Mendocino is an area on the coast for which the county, a town, and the lake are named? Cape Mendocino was named by Spanish explorers in the 1500's, after the name of the viceroy of New Spain, Antonio de Mendoza.

Summer temperatures reach highs into the low 100's while winters see lows of mid 30's. Some of the campsites are closed in poor weather. Typical winters have strong rainstorms while summer may see a rare lightening shower once or twice in a summer, if that. Most of the time, the heat is dry with a minimal breeze or no breeze. As the canopy of mature trees offer a large expanse of shade over almost all campsites, this dampens the effect of the heat on campers. Since there is no shade at the shoreline, many campers bring portable shade in the form of beach umbrellas or pop up shade-blockers or awnings.

Learn More About Mendocino County and The Wine Country

Lake Mendocino is only a short drive from the vineyards of Mendocino County and about an hour from Napa Valley.

Learn more about the wine country at these links: