Nebraska HubTrail: The HubPages Guide to Nebraska Travel and Life

The geographical center of the continental United States is located on a hog farm near Lebanon, Kansas, less than 20 miles from the border of Nebraska.

Nebraska's position smack in the middle (almost) of the United States has resulted in it being a little bit overlooked and underappreciated. Many people think of Nebraska only as a place to pass through (or worse, over) on the way to someplace better.

But the truth is, Nebraska is a beautiful, diverse state with something to offer nearly everyone, from nature lovers to history enthusiasts to sports fans.

An Introduction To Nebraska

Nebraska is the 16th biggest state in the United States but ranks only 38th in population. For many people from the eastern United States, Europe, and Asia, it's an amazingly big and empty place. To compare:

Nebraska was originally home to a number of American Indian tribes, including the Pawnee, Ponca, Omaha, and Lakota. During the Plains Wars of the 19th century, Nebraska was the site of several major battles.

Following the defeat of the native tribes, it was settled by pioneers from the eastern US and Europe, mainly Eastern Europe, Germany, and Scandinavia.

Places To Visit in Omaha

Omaha, the largest city in Nebraska, is located right on the border between Nebraska and Iowa and got its start as the headquarters of the Union Pacific Railroad in the 19th century. Millions of cows passed through Omaha's vast stockyards on their way to the eastern markets in the 19th and early 20th centuries.

Learn more about Omaha in the following hubs:

Professional travel and itinerary planner and Nebraska native Veronica Bright offers a guide to some of Omaha's best attractions with this hub, including the world famous Henry Doorly Zoo, named the Best Zoo in America by Reader's Digest in 2004, and the hip Old Market District.

One family's account of a visit to the Henry Doorly Zoo.

In 2008, Lincoln was named one of the top 30 cities for jobs in the United States. Learn about the great job opportunities there in this helpful hub.

Places To Visit in Lincoln

Lincoln, the state capital, is about an hour west of Omaha on I-80 and is home to the University of Nebraska and its famous football team, the Nebraska Cornhuskers. On Game Day in Lincoln, Memorial Stadium is the third biggest "city" in the state, with more than 80,000 fans cheering on their team in a vast sea of red.

Lincoln is also home to the beautiful state capitol building, recipient of many architectural awards and home of the only unicameral state legislature in the United States.

Learn more about Lincoln in the following hubs:

Veronica Bright's guide to Lincoln includes information about visiting the state capitol and the cool museums run by the University of Nebraska, including the famous Morrill Hall, home of the world's largest woolly mammoth skeleton.

Places To Visit In Eastern Nebraska

Aside from Omaha and Lincoln, the eastern third of the state is mostly farm country. Major crops include corn, soybeans, cattle, and hogs. In addition to beautiful pastoral scenery, Eastern Nebraska features great hunting and wildlife watching in prairie remnants and wooded hills scattered throughout the region. There are also many interesting historical sites.

Ashfall Fossil Beds in northeast Nebraska is an amazing glimpse back through time. The fossil beds were created following the explosion of the Yellowstone supervolcano 1000 miles to the west about 10-12 million years ago. A group of animals living near a waterhole were suffocated to death by the ash of the VEI-7 Bruneau-Jarbridge event, and were preserved where they fell, so well that you can even see the delicate bones of an unborn baby rhino lying among its mother's remains! This hub explains the history of the fossil beds and how to plan your trip to one of the richest paleontological finds ever discovered.

Southeast Nebraska is Pioneer Country, home of many interesting museums about early pioneer life on the Plains. This hub is a great introduction to some of the coolest attractions and events in the region. 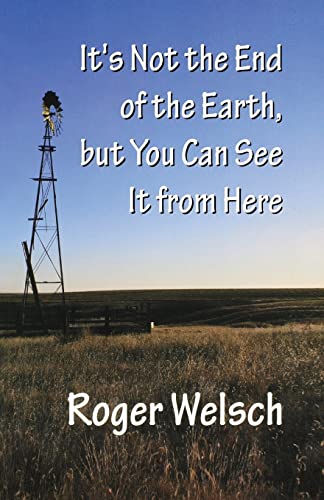 It's Not the End of the Earth, but You Can See It from Here
Buy Now

Places To Visit In Western Nebraska

The drier west is primarily ranch country, and humans are far outnumbered by cows in most counties. Arthur County, the least populated county in the state, is home to just 444 people in an area half the size of Rhode Island (pop. 1,053,209).

Most travelers passing through Nebraska take Interstate 80, a road so flat and boring that it's said you can stand a penny on one end in Grand Island and read the date in Lincoln. Little do most know that a scarce 10 or 15 miles to the north of I-80 in parts of Western Nebraska runs Highway 2, named one of the 10 most beautiful highways in America. Highway 2 passes through the heart of the remote, beautiful Nebraska Sandhills, the largest sand dune formation in the Western Hemisphere, and one of the largest regions of grass-stabilized dunes in the world. This hub provides a guided tour of the Highway and the local attractions it passes through or near.

A more general guide to the beautiful Sandhills region, organized by town.

Fort Robinson is one of Nebraska's most beautiful and historic state parks. Located near Chadron in the lovely Pine Ridge region of northwestern Nebraska, Fort Robinson played a major role in the Indian Wars of the late 19th century and later served as a Quartermaster Remount Depot, K-9 training center, and POW camp for German prisoners of war in World War 2. Today the park offers trail rides, stagecoach rides, buffalo cookouts and other Old West style fun, in addition to a pleasant campground and miles of hiking trails. Learn more about the park's history and attractions at this hub.

Between 1841 and 1869, an estimated 400,000 pioneers traveled through Nebraska on their way west on the Oregon Trail. Nebraska hosts one of the longest stretches of the trail of any state, and is home to many major Oregon Trail landmarks, including Chimney Rock, Windlass Hill, Fort Kearny, and Scotts Bluff. This hub will help you plan your trip along the Oregon Trail in Nebraska, including the major highlights of the trail itself, and other local attractions of interest to history lovers.

This hub will guide you through the sites and scenery of the lives of five of Nebraska's greatest writers: Willa Cather, Loren Eiseley, John G. Neihardt, Bess Streeter Aldrich, and Mari Sandoz.

In 1995, Forbes Magazine named the small city of Grand Island in central Nebraska the best birding spot in the world thanks to its position at the bottleneck of the Great Plains Flyway. Millions of birds pass through the area on their way south every spring, including thousands of sandhill cranes and the occasional endangered whooping crane. Nebraska's diverse range of habitats - including tall and shortgrass prairies, farmland, forest, rivers, and wetlands - makes the rest of Nebraska a birder's dream as well! This hub will help you plan your birding trip to Nebraska.

Depending on the time of year you visit, you may want to brush up on your meteorology. Nebraska has a true four season, continental climate with bitterly cold winters, hot and humid summers, pleasant but unpredictable springs, and cool, crisp autumns. We also have tornadoes, though they are rarely as severe as those in the "Tornado Alley" states further south. This hub will help you understand what to expect during a severe weather watch or warning in Nebraska.

The Butt Bandit of Valentine, Nebraska

A mysterious vandal in Valentine, Nebraska has been leaving some rather unique, er, impressions all around town. This hilarious hub tells the full story of the Valentine's mystery "Butt Bandit."

Whether you live in Nebraska or are just passing through, this hub will help you gain an appreciation of the state's beautiful native trees.

This hub shares some fascinating excerpts from the hubber's great-great grandmother's diary of life as a homesteader in Keya Paha County in the 1880's.

Nebraska ranks sixth in the nation in wind energy potential. Learn about what Nebraska has been doing to take advantage of this clean, renewable resource.

Bellevue, Nebraska, next to Omaha, is home of Offutt Air Force Base and the fastest growing city in the state. Learn about job opportunities in the Bellevue area in this helpful hub.

The HubTrail is an attempt to collect great travel-related hubs written by local residents or frequent visitors to highlight lesser known attractions and create a HubPages tour of the world.

For more information, please visit Hubtrails - What you need to know!

Not a member of HubPages? It's free! Sign up and come join the fun!

If you have a Nebraska travel hub you'd like to to add to this capstone, please add the following tags and drop me a line in comments below. Only relevant, high quality hubs will be added.