The Queen of Tourism: Opatija, Croatia

Opatija as one of the best places in Croatia. Also known as the "Old Dame", the "Pearl of the Adriatic" or the "Queen of Tourism". Pronounced o-pat-ee-ah, Opatija means abbey in Croatian. Deservedly hailed as “the Pearl of Croatia” as far back as the 1880s.

Opatija first grew to prominence as the playground of Viennese aristocrats. Drawn by its stunning setting and pleasing climate, elite members of the Austro-Hungarian Empire flocked to the quaint fishing village, building elegant belle epoque villas along the sparkling Adriatic. Opatija grew into a popular resort/spa town, welcoming guests all year round. Archduke Ferdinand, Empress Maria Anna, Austrian Emperor Franz Joseph, Gustav Mahler, Puccini, Chekov, James Joyce and Isadora Duncan are among the luminaries who lingered here “back in the day”.

The waterfront promenade (Lungomare) stretches three mles (4.8 km) north to Volosko, famous for its restaurants and six miles (9.6 km) south to the inviting beaches at Lovran. Don’t miss the iconic statue of the Maiden with a Seagull, installed on the walkway in 1956.

The place is known as the "Queen of Tourism" because of its remarkable Tradition of Tourism. It became the icon of beauty, charm, glamour and style.

Liburnians, the region’s earliest inhabitants, settled here around 900 A.D. Known form their ship building skills, the seafaring residents made their way as far as Asia Minor and North Africa. Romans eventually wrested control of the region, holding power until the fifth century; Ostrogoths, Byzatines, Slavs and Franks would follow. Aquileians from what is now Friuli-Venizia Giulia held sway from the 12th century unitl the Hapsburg Dynasty came to power in the 15th century. St. Jacob, the town’s abbey, was owned by Augustinian monks from nearby Rijeke from the 1550s until 1723; it is now a Catholic monastery.

During the Austrian Ruling

Opatija prospered under Austrian rule, especially after the building of Villa Angiolina in 1844 and the addition of a railway link in 1873. Opened in 1884, the elegant Grand Hotel Quarnero (now Hotel Kvarner) was the first hotel on the Adriatic coast. Tourism has been the driving force in the economy ever since, despite interruptions by two World Wars. Opatija was ceded to Italy following WWI; Yugoslavia annexed the region after WWII. Following the breakup of Yugoslavia in 1991, Opatija joined the newly formed Republic of Croatia. Many of the extravagant 19th century villas are now hotels. 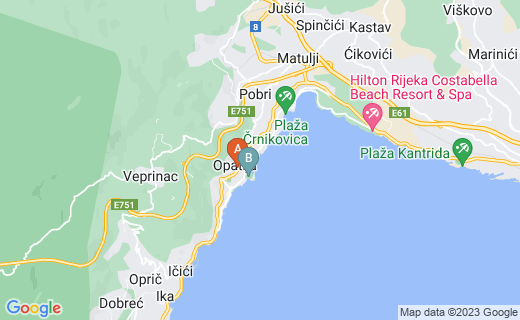 Where the Croatian Museum of Tourism Lies

Village in Croatia which became famous for its old walls.

It is the smallest town in the central part of Istria.

It is the mountainous region in Opatija Croatia.

Cave that stretches from the boundary of Croatia and Slovenia.

Best Time to Visit the Place

The average weather condition of Opatija Croatia: January is the coldest at 6 degree Celsius; July is the hottest month at 25 degree Celsius and Novemer is the wettest month with 181mm of rain. These results maybe helpful for those who plan to spend a vacation in this beautiful place.

- It is a 4 star hotel offering luxurious accommodation for tourists. It lies near the center of Opatija. Museum, theater and park are nearby as well.

- It is a modern style hotel situated in the town center of Opatija Riviera. It offers beautiful view over the Kvarner Bay.

- It's located near the beautiful beach on the Adriatic Sea. Travelers can enjoy the beautiful landscape of the grounds and stunning seaviews.

- It is the former Imperial Hotel locaetd in the center of Opatija. It was built during 1906 which made it as the oldest tourist resort in town.

- The hotel is near Slatina beach. Its secession style architecture of the hotel made it more appealing as their visitors can enjoy the ambiance of past times, but with a twist of modern facilities.

- It is also located in the center of Opatija overlooking Kvarner Bay. Just a 10 minute walk going to the center where bars, casinos and other places are located.

- A hotel just next to the main beach in the center of Opatija and near to the main promenade. The perfect hotel for people who wants a very romantic atmosphere.

- Also located in the town center of Opatija right next the sea and few kilometers away from the promenade.

Other Places to Visit

- A road that runs along the seashore that stretches from Volosko to Lovran.

- It is the former fishing village of the municipality in Primorje, but turned into a tourist resort.

- A city which is part of Opatija with magical appeal as a picturesque fishing village.

- The most famous park in Opatija with different variety of plants, lovely benches and picturesque paths.

5. Maiden with the Seagull

- It is an elegant statue standing on the reef beside Lungomare Promenade. It symbolizes the entire Kvarner Region.

- It has a medieval wall with nine towers on top of a hill. The place was built as an administrative, a commercial and a cultural hub of Histria and Primorje region.

- Also known as Cathedral of St. James. It's a Catholic Church in Croatia with triple nave basilica wtih thre apses and single dome.

- It is a partly concrete and partly sandy beach located near Opatija's Walk of Fame.