Setenil de las Bodegas, a Village Under the Rock Hill

I thought you wouldn’t believe this. Personally, this is amazing place for me. I am back with another hub about traveling topic. I wasn't accidentally discovered this information, but I am glad to know this and search more about this place. Hopefully this hub useful for us, and it’s also good as an alternative option for traveling place. Why this place so special? This is out of my imagination. Like the title of this hub, this city was located under the rock. Don’t leave your chair and stay continued to read this hub.

This place called Setenil de las Bodegas, located between the towns of Ronda and Olvera in the province of Cadiz, this is another of Andalucia’s famous pueblo blanco. This village is located 157 kilometres (98 miles) northeast of Cadiz (http://en.wikipedia.org) We can find white village under the rock overhangs above the Rio Trejo. Setenil name was taken from the Roman Latin phrase septem nihil , it’s mean “seven times nothing”. "de las Bodegas" based on the history, a long time ago (in the 15th century) there are many vineyards there. Christians began cultivating and storing olives and almonds, and developed wineries too. That’s make sense because we can easily found various fruits and vegetables in Rhonda. Its outlying farms also provide Ronda and other local towns with much of their fruit and vegetables. Unfortunately, pests wine (phylloxera insect ) break off these vineyards in the 1860s. By this insect effectively destroyed most European vine stocks.

Based on the story, in the early of 16th century, there was a huge Setenil warehouse under the rock. This place stored all productions because it has a cool air even on the hottest summer though. That’s why Setenil has high reputation for meat product, especially chorizo sausage and cerdo (pork) and other product like: olive oil, honey, jams and Andalucia Wines are very tasty. I heard that Setenil  bars and restaurants are among the best in the region.

Setenil also become one of the Andalucia white villages. This place tried to stay as cool as possible in the hottest area of Spain.  The people in Setenil de las bodegas try to paint all their houses in white color. They have another reason why they did this, because the white color reflects sunlight well. I heard several reasons why people enjoy living at this place. One of the reasons why Setenil cave village proved to be the perfect place to live, it was believed since prehistoric times. The cave environment gave cold effect. It can isolate the heat in summer or even in winter. In summer it can be a natural air conditioner. It’s so fresh and natural. Settlements are wedged beneath rocks are located along Trejo Rio river, where the location of houses actually attached to the hills. Amazing, these houses seem 'grow' from the rocks and some houses even make the hill rocks as the roof of these houses. There was even a roof which overgrown by roots olives. The residents over there brave enough to build a residence on the hill rocks. This hill has a layered housing. Wow....unbelievable. 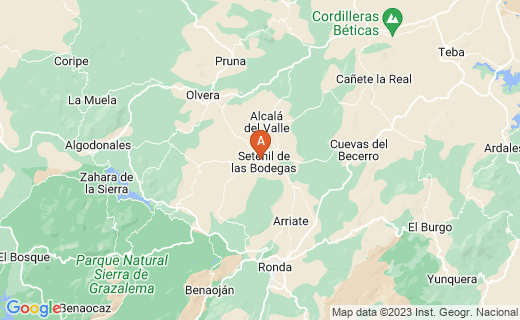 The pictures so relaxing and it shown how beautiful this village. I never found a place like this before. It’s so clean, tidy, fresh and natural. I can’t imagine the people make this architecture adjusting the contour of the cliff, as if hanging and built just under the rock. It's so amazing and fantastic building. Good comparable between nature and architecture technique. From aisle to aisle looks orderly neat, we can't find kind of garbage at all. I believe the tourists felt at home here. Beautiful color looks contrast between the colors of cliff which and white building. That’s why Setenil de las Bodegas called the white village. The first time I saw all the pictures, this could become a great hub. Maybe some of us knew this place very well, but in the other hemisphere does not know information about this place. I hope all the pictures give the soul of this article. Most of the picture was taken from http://www.flickr.com. We may visit to this place someday or we can put Setenil de las Bodegas on our travel list. I thought some of us known this place very well. Let’s share about this place if you have experience in visiting Setenil. Personally, I am surprise with all architectures here. It could be wonderful experience living at this place. That’s why Setenil de Las Bodegas is a popular Spanish destination where all visitors are welcome to get acquainted with people who like to live under a rock.

You can also read: