Rick is a Cleveland-area architect who reviews and writes extensively about local architecture, landmarks and attractions.

Originally conceived by the local real estate development and construction company of The Richard E. Jacobs Group as SouthPark Center, this sprawling two-level regional mall and its affiliated perimeter facilities in the heart of Strongsville, Ohio, is now known as Westfield SouthPark.

Throughout the 1960s and 1970s, a sizable portion of Cleveland’s inner-city and inner-ring residents (primarily white and ethnic) began a suburban expansion southwestward along Interstate 71 toward Columbus. To those involved in commercial retail development and construction, it became apparent that the Interstate 71 interchange at Royalton Road (Ohio Route 82) would become a prime focus of growth. Sizable areas of available land remained, and Royalton Road served as a primary east-west artery connecting residential suburbs in both directions. Nearby Pearl Road was already a thriving commercial corridor, of primarily strip centers and stand-alone buildings.

Early schemes for a new and relocated stadium for the Cleveland Browns' NFL franchise in the vicinity of that interchange became public in the early 1980s, but fell to overwhelming local disapproval. Then, local real-estate mogul Richard E. Jacobs acquired a large parcel of raw land to the southwest of the primary interchange, abutting Howe Road and Royalton Road, and began plans for a regional shopping center. The form of the eventual mall crystallized around the intended local anchor department stores of Higbee’s and The May Company.

Ground for the planned complex was finally broken in 1993, with SouthPark Center opening for business three years and more than $200 million later. The completed center included not only Dillard’s (the renamed Higbee’s) and Kaufmann’s (the renamed May Company) department stores, but also J. C. Penney’s, Sears, over 100 other retailers, an elegant food court, and a grand porte cochere — a massive extended greeting canopy above its main entrance. The project also made allowances for an eventual fifth anchor store location, plus substantial peripheral land development for other retail, banking, restaurant, office and convenience tenants.

Assisting The Richard E. Jacobs Group in both sign design and the lengthy local approvals processes for the development was the local design consultancy of ZZ Design Inc., headed by architect Richard Zimmerman. His firm produced multiple architectural renderings for the project, designed most of the development's signs and graphics, and represented the development team in many public hearings, presentations, and submission sessions. ZZ Design Inc. served as a design consultancy to The Richard E. Jacobs Group for over 20 years on projects throughout more than a dozen states.

Situated about SouthPark’s site perimeter beyond the limits of the central mall structure are a Cleveland Clinic Medical Office Building, a supermarket, several restaurants and banks, and such substantial free-standing retailers as Office Max and Kohl’s. The shopping center is noteworthy for its coordinated upscale architectural treatment, cohesive overall site plan and parking, and lush landscaping.

The public mall interior is roofed by grand barrel-vaulted trusswork and plentiful skylights over intermittent seating areas accented by plantings. A comprehensive sign design package by ZZ Design Inc. of Solon added to the mall's understated elegance and visual clarity and appeal. As the central element of the Royalton Road shopping corridor, the center has proven a very strong draw and popular destination for local and regional residents alike. 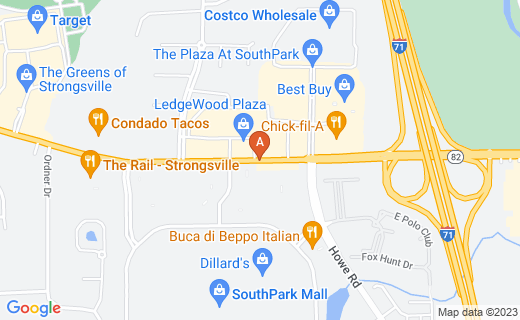 Exit I-71 at Royalton Road, State Route 82, Strongsville and you can't miss this mega-mall!

After acquiring the shopping center from The Richard E. Jacobs Group in 2002, The Westfield Group renamed it Westfield SouthPark, and 4 years later began a substantial reconfiguration and expansion of the mall. That $150 million redevelopment brought a multi-screen cinema to the project along with an additional two dozen retailers. In addition, restaurants and high-profile retail tenants were introduced along the primary outer façade of the mall.