Rick Zimmerman is an architect and lifelong Cleveland native who writes about sustainability and Cleveland landmarks and architecture.

Known locally as simply The Justice Center, this imposing complex in the heart of downtown Cleveland, Ohio is actually an interconnected grouping of both city and county law enforcement and judiciary facilities consuming an entire city block.

The Justice Center complex is within the large city block bounded by Lakeside Avenue, Ontario Street, West St. Clair Avenue, and West Third Street in the public facility/judicial district. It is situated immediately across Lakeside Avenue from the historic neoclassical Cuyahoga County Courthouse of 1912. Comprised of four distinct though similarly styled structures of pale pinkish-beige granite, the complex also includes a sizable mid-block skylit atrium that accommodates secure entrances, grade level transitions and access to both below-grade and connected neighboring parking garages. A rather barren public plaza extends from the atrium to Ontario Street, and some green space fringes the northern face of the complex. 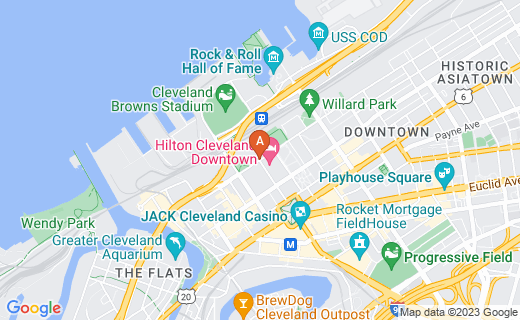 The City of Cleveland/Cuyahoga County Justice Center is a substantial development in neo-Brutalist governmental/institutional style.

The Cleveland Police Headquarters Building, designed by the architectural firm of Richard L. Bowen and Associates, rises at the northwestern corner of Ontario Street and West St. Clair Avenue. That Headquarters building opened concurrently with the rest of the original Justice Center complex, after more than 7 years of planning and design, and an additional 3 years of construction.

To the Police Headquarters’ north beyond the central atrium of the complex, and facing the historic neoclassical 1912 Cuyahoga County Courthouse across Lakeside Avenue, sits the Cuyahoga County and Cleveland Municipal Courts Tower. Designed by the firm of Prindle, Patrick and Partners, the Courts Tower’s 26 stories rise to an overall height of 420 feet, providing a strong presence in the city’s lakefront skyline, as well as dramatic views toward Lake Erie and over the rest of the city's core. The Tower houses 44 court rooms and 9 hearing rooms shared by city and county.

To the Police Headquarters’ north beyond the atrium, and facing the historic neoclassical 1912 Cuyahoga County Courthouse across Lakeside Avenue, sits the Cuyahoga County and Cleveland Municipal Courts Tower. Designed by the firm of Prindle, Patrick and Partners, the Courts Tower’s 26 stories rise to an overall height of 420 feet, providing a strong presence in the city’s lakefront skyline. The Tower houses 44 court rooms and 9 hearing rooms shared by city and county.

The Corrections Center ( or detention center and jail), also designed by Prindle, Patrick and Partners, and its subsequent expansion, occupy the western portion of the city block. The original design employed pod-like clusters under substantial daylighting to amass 777 cells in the Corrections Center's first phase. Plagued by political wrangling, contentious formulation of design and construction teams, design delays, and cost overruns, the three original structures of The Justice Center finally opened in 1976 at a cost of $128 million.

The architectural stylings of all of these three original buildings are similar, with strongly slotted horizontal window bays, slope-faceted stone-clad spandrels, and strong vertical and horizontal forms. Deep recesses and accentuated columns at the bases of the Police Headquarters and Corrections Center receive the broad stone-paved plazas at street level. Punctuating the main entrance plaza on Ontario Street is the signature Isamu Noguchi sculpture, Portal, a massive black coil of steel pipe. The resultant overall visual character of the complex is of contemporized Brutalism. The Justice Center has been commonly perceived by the citizenry as an unfriendly, overpowering and intimidating presence in the cityscape. The brutal lower floor scaling, the open plazas, and the site's minimal landscaping contribute to a harsh pedestrian environment at street level through Cleveland's often severe winters.

In 1995, to relieve severe housing pressures on the original Corrections Center, an addition, known locally as 'Jail II' and designed by the minority architectural firm of Robert P. Madison, was erected to fill out the southwesterly portion of the city block. Jail II, with its pale blank wall faces punched by a regular grid of small square openings, breaks from the consistent design of the original complex.

Within the last several decades, increased post-9/11 security measures and access limitations have made The Justice Center even less friendly and approachable to the facility's users and staff and the citizenry, and have virtually eliminated any benefit or appeal of its central atrium and plazas. As of 2019, there are now continuing discussions of completely demolishing and rebuilding, or drastically altering and renovating, the entire 40+ year old complex — especially in light of all of the development, redevelopment and aesthetic improvement of the surrounding downtown core.