Travel - "The Town Too Tough To Die" in Arizona

Tombstone was founded by Ed Schieffelin in 1879. Shortly thereafter, he found silver near the San Pedro River. The small outpost became a boom town.

There were some fictitious accounts of what transpired in Tombstone, "The Town Too Tough To Die," that led to a general misunderstanding of the actual facts. So, here is the real story, as I acquired it in the town itself.

Wyatt Earp and his common law wife, Celia Ann "Mattie" Blaylock, arrived by wagon along with Wyatt Earps' two brothers and their wives, in their respective wagons. Whilst "Doc" Holiday had traveled as far as Arizona with the Earps, he did not join the Earp family in Tombstone until the following year. The Earps set to filing mining claims but worked in their former professions in saloons, gambling, shotgun riding (for Wells Fargo), and they also worked as lawmen. Up until this point, Wyatt Earp was not a famous man.

The next year, 1880, the year Doc arrived in Tombstone, six government mules were stolen. A posse that included Wyatt Earp was formed to collect the mules from the McLaury Ranch. There is some debate as to what happens next. Either way, the mules were not returned and bad blood was formed between the Earps and the McLaury men as a result of this incident. In this same year, Wyatt Earp became Deputy Sheriff of Tombstone. At this time, Wyatt Earp, who had been little known before arriving in Tombstone, began making a name for himself as a good lawman.

At the end of 1880, Marshal Fred White was shot in the groin whilst attempting to disarm Curly Bill. The McLaury boys were not involved in that incident, though that has been often reported. During this time frame, the bad feelings between the Earps and McLaurys grew and a few in-town incidents made the feeling worse. Wyatt Earp had his life verbally threatened more than once by the McLaurys. It was right after this point in history, that the fight at the OK Corral happened.

When you visit Tombstone today, the town appears much as it did in the days of Wyatt Earp, in the 1880's. Preserved by the state of Arizona, the town is now a part of the Tombstone Courthouse State Historic Park, complete with daily "shoot-out" reenactments with in-character portrayals of the famous cowboys and lawmen of the time.

The operating storefronts in this state park add life and activity to what might otherwise look like a ghost town. The real life reenactments, available "characters" of the period are at the park throughout the day and buildings of the period give the entire area an old time charm. There are candy shops, Indian trading posts, saloons, and dining available. Just outside the park is ample free parking and more historic sights are marked along the route. Ghost tours can be found in Tombstone.

A curious looking immigration checkpoint run by boarder patrol is located just outside of Tombstone. When we drove through, they had boarder patrol working dogs on the job and one approached to sniff my vehicle. I quickly thought of that young twenty-something man I bought my car from in California. Could he have a stash of something he 'left behind' in my recent vehicular acquisition? Uh-oh. But, lucky me. I was waved along to briefly speak with a boarder patrol officer before continuing on in my journey. They definitely added a feeling of safety during my visit to Tombstone.

Info On The Tombstone Cemetary Where the Famed Are Buried 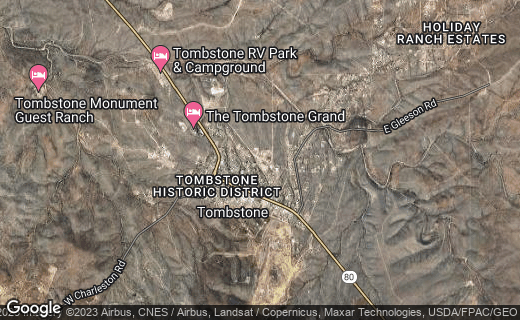