Where To Find Gold In Alaska

The Alaskan Gold Rush began in the Yukon in 1896. Many prospectors battled strong adversities to strike it rich in Alaska. These prospectors faced harsh terrain, even harsher weather conditions, and many of them lost their lives in their quest for gold.

Now prospectors can arrive by tour bus and pan for gold in the comfort of their own trough with a guarantee of finding gold.

I became one of these prospectors on a recent trip to Alaska. I didn't exactly hit the mother lode, but I was able to walk away with a few bits of gold. Hey, that's every prospector's dream, right?

Where to Find Gold in Alaska

My Review of El Dorado Gold Mine

At the start of my tour, we were taken to the entrance of the mine by open passenger railroad cars pulled by a replica engine of the Tenana Valley Railroad. The conductor was a really nice man by the name of Earl Hughes. His tour was very entertaining as well as informative. Along with telling us information about gold mining and its history, he also serenaded us with his guitar, which he played very well.

Our first stop was inside of a permafrost tunnel. A miner explained to us the difficultly of mining underground one hundred years ago. We also saw the different tools miners used underground as well prehistoric bones that were found near the site.

Once out of the tunnel, the train guided us through a sort of "mining through the years in Alaska". We were shown different mining techniques used in different time periods. The machinery used still runs and we were shown exactly how it was used one hundred years ago.

How To Pan For Gold

At the end of the line, we exited the train to an area where we were shown exactly how panning for gold works. There are benches on either side of a sluice box where we sat to listen to the presentation. You will really want to pay attention to what is said, because you will need the knowledge to be able to pan for gold yourself later.

The gold panning presentation is done by Dexter and "Yukon Yonda" Clark. They have been operating gold mines for over 25 years, so they are very knowledgeable. They explained to us how mining for gold is done in present day Alaska, and the many forms in which gold is mined, such as prospecting, panning, and placer/sluice box mining.

The El Dorado Gold Mine uses a placer/sluice mining method. On one end there is what looks like a dumpster where a backhoe drops a load of dirt in. Coming from what looks like a hole in the side of the dumpster is what is called the sluice. This is line with what they called riffles, but it just looked like the artificial lawn rugs that you can buy in a store.

Up above the dumpster are pipes. Water is released through the pipes and down through the dumpster and out the sluice. Mr. Dexter Clark showed us how to take the sediment that is left in the riffles, put it in a washtub, and then pan for gold. He made it look simple, but, trust me, it's harder than it looks.

After we were shown how to pan for gold, it was our turn to try our hand at it. We were each given a "poke" (sack) full of dirt, a container for our gold, and a pan. There are troughs with benches on each side, so I picked a seat and got to work.

Let me tell you, it's harder than it looks. I poured my dirt in my pan and dipped it in water like I was shown. The theory is that you're supposed to "wash" the dirt out of the pan so that only the gold is left. Gold is heavier than dirt, so the dirt floats off and the gold stays.

I was too nervous that I was going to wash the gold out, too, so it took me a while to get the hang of it. There were workers nearby who was willing to help anyone who had a question or was having trouble panning. I made them earn their money that day. 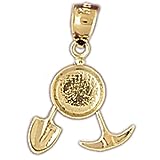 After I had panned for gold, we went to a building called a cook shack, which was really like a souvenir shop. This is where you take your gold to be weighed and they'll tell you how much it is worth. They will offer to buy your gold, or you can keep what you've found to take home for a souvenir. If you wish, you can also pay for them to mount your gold into jewelery. The jewelry was very pretty, they do a very good job.

We were served complimentary cookies, hot chocolate, and water. The cookies were homemade and delicious. The cook shack is where we boarded the train that took us back to the depot.

Everyone Is Guaranteed To Find Gold

Yes, that's right. The El Dorado Gold Mine guarantees that everyone will find gold. I did. Everyone in my group did. You are allowed to take home whatever you find. I was hoping for enough gold to pay for my Alaska vacation. Heck, I would have been happy with enough gold to buy my dinner that night. I only found about $5 worth, but it was a fun experience.

El Dorado Gold Mine is located about nine miles outside of Fairbanks, Alaska. If you're ever in Fairbanks, it's well worth your time to visit. El Dorado Gold Mine takes visitors back in time and shows them mining techniques through the years. At the end of the tour, visitors are shown how to pan for gold and given the opportunity to try it for themselves. Visitors are allowed to keep the gold they find.

For adults admission is $39.95; children's admission (ages 3-12) is $24.95. You can call ahead and make reservations. The summer season in Alaska is pretty busy, so I'd recommend reserving a spot if you're going to be in Alaska in June, July, or August.

Other Articles About Alaska