The City of Anchorage and Alaskan former Governor Sarah Palin are about the same age, putting a point on the fact that Alaska is a young state, full of resources of the animal, vegetable,and mineral kinds. Mrs. Palin has interested herself in traditional and alternative forms of energy production while governor, becoming more outspoken about them during her run for Vice President in 2008. She returned to Alaska to attend to these and other matters more fully and the results will be increasing numbers of employment opportunties in related energy and green collar jobs.

Anchorage, Alaska and its surrounding metropolitan area were named to the list of 25 Best Small Cities for jobs and Business in America in the late 2000s. Additional attention came to this major Alaskan city as a result of the 2008 US elections and the advent of a new natural gas pipeline to be constructed in early 2009 in partnership with Canada. More Americans and global citizens became interested in Alaska and in Anchorage for these and a variety of other reasons.

These factors include climate change and global warming that have been erasing the northwest shoreline of Alaska since the 1980s and forcing the state's Indigenous Peoples to move 40 miles inland in order to preserve their villages and officially-formed communities. Their fishing opportunities have been restricted, because some of the fish and other wildlife have migrated away from the melting pack ice and receding shoreline in the Northwest.

Attention was also given to the plight of polar bears and wolves in Alaska and particularly to the wildlife in ANWR, where deposits of petroleum are located. A major source of attention has been an Alaskan multi-billion-dollar oil and gas pipeline project resulting from a partnership of Canadian and American companies to send energy from Alaska down to the Lower 48 States. This is a major source of new jobs.

The later 2000s offered supreme focus on Alaska as a source of controversy and of resource wealth. It became known in some circles as "The Energy State", where it had formerly been called "Seward's Folly" in the years before its statehood. The public and some political figures had decided it was a useless wasteland at that time, but this turned out false.

Anchorage is the major city for business and transportation in Alaska, and some of the capital city of Juneau's business is permitted to be operated out of Anchorage, where the state's First Family resides. Juneau is far removed, in the states southeastern, small panhandle and is rather "out of the action."

Anchoarage is the most populated of any Alasakan municipality and is home to a large percentage of Alaskan Native People - about 11% of total city populace, which is easily 10 times the native proportion shown by other major US metro areas.

The Greater Anchorage Area Borough was officially unified on New Year's Day in 1964 and just a few months later, the infamous Good Friday earthquake destroyed almost all of the city.

After reconstruction, the 1970s brought development of the Prudhoe Bay oil fields and the Trans-Alaska Pipeline that paid workers huge wages to come to Alaska for elsewhere.

It brought other businesses as well, with office space and housing mulitplying threefold in just 10 years.

In the early autumn of 1975, the Anchorage City and Borough governments were unified, as were the cities of Girdwood and Glen Alps. To put it in perspective, Anchorage is just a bit older than Star Trek® and the unified area in 2008 was just 33 years old.

The greater metro area offers room for business and residential growth through at least 2020 and offers a youth and vibrancy in its very existence.

The fishing industry is thriving in the bowl or bay of Cook Inlet at Anchorage and the species found there and even in the middle of downtown include king salmon, silver or Coho salmon, and pink salmon as well as rainbow trout, Dolly Varden, pike, grayling, smelt, and whitefish.

The Alaskan Government also stocks 30 fishing lakes nearby for visitors to fish for salmon, char, and grayling.  Fishing of some sort can be done form April trhough October, although ice fishing is also done with good success in the winters. 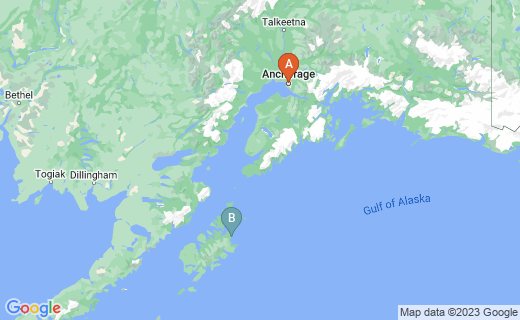 The Port of Anchorage is Busy

Anchorage and the Port of Anchorage make up the state's hub for trade of several kinds. It handles 85% of freight needs for the Alaskan Railbelt. The Alaska Railroad connects form there to Seward, Whittier, and Fairbanks AK and many barge and trucking companies do a lucrative business around the port.

Numerous government agencies are anchored in Anchorage proper, with large numbers of tourist attractions and service industries operating there at a profit. In addition, 8,500 military people are stationed at Fort Richardson and at Elmendorf AFB. Airports include Ted Stevens Anchorage International, Lake Hood Float Plane Base, Merrill Field, and both US Army and USAF airports.

One of the major attractions is the Last Great Race, the Iditarod Sled Dog Race that commorates annually the transport of life-saving diptheria serum to the children suffering in an epidemic at the end of the trek in 1925 Nome AK. Only sled dogs could deliver the medicine 1,150 miles to save the children's lives. Some few visitors every year give up their careers back home and stay in Alaska to raise sled dogs.

The comprehensive web site of the Iditarod includes film, newsletters, planning up to the yearly Senior and Junior events, teacher's materials for the classroom, interviews, and several other features at http://www.iditarod.com/ (See their site map for complete listings). A Teacher on the Trail is selected every year, similar to the Teacher in Space program from NASA. Further, a series of smaller races are run in norhtern USA, Canada, Russia and other countries, making Alaska a sort of mecca at which the world of sled racing meets every March.

Most frequent listings on the Internet:

Jobs listed in bold print are thaose that are matched by job listings in large numbers on the Internet alone. Additional jobs in these categories are listed within companies Anchorage.

Nearby New Jobs Available to 2020

PORT MACKENZIE AK -- Port MacKenzie will triple the size of its barge dock in the 2010s via its $3,000,000 ARRA economic stimulus funding.

WASILLA AK -- This city prepared to become the 3rd largest in Alaska when annexation proposals were accepted after October 2009. Land would increase from about 13 square miles to 31 sq mi and population double to 32,000. Federal and state revenue sharing would increase, likely to bring more jobs to Wasilla. 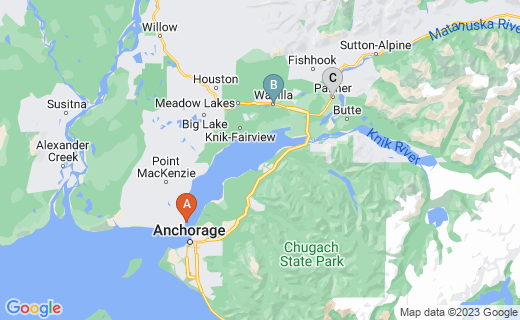