Infrastructure and Energy Changes in Southern Ohio Through 2020

From Agriculture to Industry

Since the decline of crop and animal farming in the 1970s and 1980s, the Southeast Quadrant of Ohio has experienced the highest rates of Unemployment and federally defined Poverty within the state. A gradual decline in coal mining also hurt Southern Ohio during these years. Even in 2011, a full 50% of the entire state population received food assistance in the form of SNAP (Food Stamps) or food pantry provisions. Southeastern Ohio continued to be the hardest hit.

In the mid-1980s, Central Ohio's leading attorneys sent mobile law offices, built in trailers or modular homes, to interview and serve clients in Southern Ohio in SSI, SSDI, and Workers Compensation claims. These new clients had often lost their agricultural crops and/or farm equipment, as well as having suffered physical injuries and chronic debilitating conditions that prevented them from gaining substantial non-agricultural employment in their home towns and counties.

These individuals were stuck without resources in a kind of wilderness and mass transportation suffered its first cuts there in Greyhound Bus service reductions at this time. Without the dedicated vans for those already receiving SSI or SSDI, these clients were stranded on their own land, miles from the nearest town. Many were without transportation whatsoever, because their neighbors were in the same predicament and very few had a horse.

While it may seem that attorneys were "suggestive selling" SSI or SSDI claims to these stranded individuals, these lawyers and their paralegals aided clients in securing deserved disability income. However, in the 2010s, a new generation of Southern Ohioans can gain employment through jobs offered in the local infrastructure and energy expansions under Stimulus Funding. 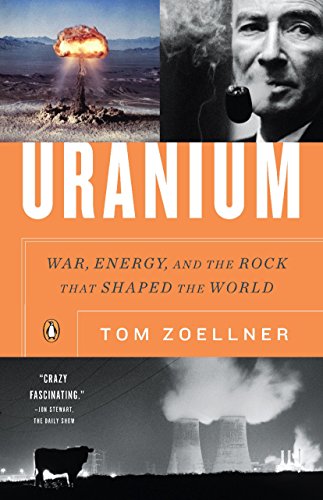 Uranium: War, Energy, and the Rock That Shaped the World
Buy Now

Ohio Governor John Kasich returned $800,000,000 to the US Federal Government after he took office. Half was for a re-institution of the railroads from Cincinnati to Cleveland and half was already in use for education. He wanted neither pot of money. However, during Summer 2011, Kasich asked President Barack Obama for financial help in opening uranium operated power plants in Southern Ohio.

Kasich's state jobs program was based on efforts by his business associates in the private sector, raising thousands of eyebrows. Meanwhile, the uranium power plants seemed like a sustainable jobs program that would work for the poorest people in the state. The Governor asked for a $2,000,000,000 loan guarantee in the President's jobs program. This would boost and develop jobs and economies in the Southeastern Quadrant of the state, while the Ohio Space Corridor continued to develop these things in the Southwestern Quadrant as the corridor had done for a decade.

The previous Democratic governor had aided both Northwest and Southwest Ohio greatly in backing Aerospace and Education Sectors as well as others. Toledo began gaining a firmer grasp on crime, especially trafficking of children, and its Center of Science and Industry (COSI) reopened. Tourism increased to both the Greater Toledo Area and the Greater Dayton-Fairborn Aviation Heritage region under the previous leader, Governor Ted Strickland.

Kasich, a Republican governor visited and toured the American Centrifuge Plant in Piketon OH along the Ohio River and 65 miles south of the capital, Columbus. He felt that the plant was vital to national security and national energy security. It was designed, when completed, to increase jobs by 8,000 new positions nationwide, with approximately 4,000 new jobs in Ohio.

At the same time, new oil development is underway in Ohio in the 2010s, with plans to drill in State Parks and State Recreation Areas as well as other lands. 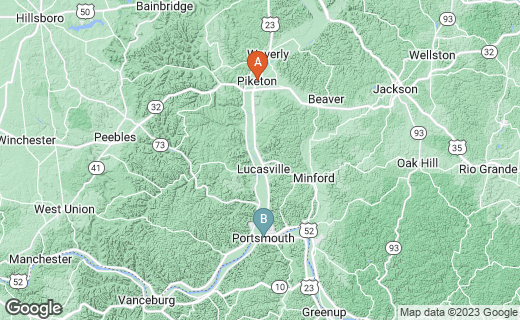 Site of other energy production facilities. Lucasville, half-way between the two cities, is the site of a major maximum security penitentiary. 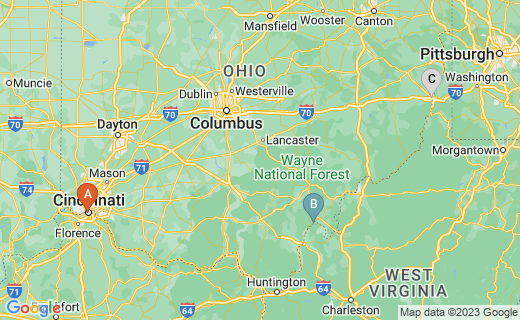 John A. Roebling and His Suspension Bridge on the Ohio River
This book covers the story of the building of a famous Cincinnati River and does so with good text and great photos.
Buy Now

Several of the bridges connecting Ohio with Kentucky, West Virginia, and Indiana (see a sample on the map above) need replacement and this reconstruction may take on the proportions of the Works Progress Administration programs of The Great Depression. Many new jobs will open as workers are needed on these bridge projects. A National Historic Landmark, a bridge in Bridgeport has already imploded and fallen for replacement during 3rd QTR 2011.

Near the other end of the Ohio River in Cincinnati, the Brent Spencer Bridge carries 155,000 vehicles daily, but is beginning to crumble. Over 213,000 vehicles will need to cross the bridge by the end of Barack Obama's 2009 -2012 Administration. It is vital to state transportation and economy.

The State of Ohio and its governor hope to receive funding for these and other bridge replacement projects to continue to afford the infrastructure needed for increasing numbers of freight and passenger vehicles. As the Ohio Space Corridor continues to develop. Cincinnati will become even more important to freight and passenger transportation than it is currently. Manufacturing of several types has begun to increase in the 2010s in Northeastern Ohio, with the need to ship more parts and assemblies through Cincinnati and Bridgeport.

The Brent Spence Bridge specifically, on I-75/I-71 and connecting Ohio with Kentucky at Cincinnati/Covington is targeted for repair that will produce new jobs. Additional Ohio River bridges that are to be replaced from 2011 - 2020 will keep the newly employed working.

Southern Ohio will see an increased need for