The History of Sugar Beet

Beet and its Mediterranean Origins

Throughout most of human history, honey was the only readily available sweetener until the Arabs developed and propagated the process of refining sugar from sugarcane. However, as we will see, and mostly due to politics another source of sugar became global – sugar beet (Beta vulgaris). Beet has a long and complicated history of cultivation, possibly dating back to second millennium BC when it was domesticated around the Mediterranean basin. Then as now beet is still grown for various different reasons from which many different varieties and cultivars were selected. Possibly, beet started by being cultivated for its leaves as it happens today with the cultivated varieties of chard (Beta vulgaris subsp. vulgaris convar. cicla). Beet was widely used in Ancient Greece and Rome as a medicinal plant that lost much of its importance when spinach was later introduced to Europe by the Arabs in the twelfth century. Later, during the eighteen century beet started to be cultivated also for its taproot not only as a source of sugar but also as fodder crop (Beta vulgaris subsp. vulgaris convar. vulgaris).

All the varieties and cultivars of beet descend from the wild slender-rooted ancestor sea beet (Beta vulgaris subsp. maritima) that still grows in sandy soils, and especially near the sea where it tolerates high sodium concentration in the soil. It native range goes from the Canary Isles, the European Atlantic coast, all along the Mediterranean coast, and as far as the Caspian Sea, Near East to west of India. A second wild subspecies of beet, Beta vulgaris subsp. adanensis, occurs in the Eastern Mediterranean region from Greece to Syria. Wild beet is a perennial plant which grows up to 1.2 m high that flowers in the summer. The very small flowers are hermaphroditic, wind-pollinated and produced in spikes. The heart-shaped leaves of wild beet have a pleasant texture and taste when served raw or cooked. For this reason they are known as wild spinach. The taproots are most commonly deep red-purple in color, but can also appear in a wide variety of other shades, including golden yellow and red-and-white striped. For this reason beet was also grown for pigments and flavor as it still happens today with red beet (Beta vulgaris subsp. vulgaris convar. vulgaris). Cultivars are usually larger than wild specimens.

The Rise of Sugar Beet

The history of sugar beet breeding is an interesting example of the interaction of food, botanical science, and especially global politics. Obviously, like most things in politics it started with a war. After the Arabs introduced sugarcane to Europe, during the great colonial period of Spain and Portugal in the fifteen and sixteen centuries, sugarcane was spread throughout their colonies in the tropics. In those times, the Portuguese through Brazil had much of the global monopoly of sugar trading. With changing political fortunes, by the early eighteen century the British controlled many of the sugar-producing territories directly or the sea routes by which sugar was shipped to Europe. After Napoleon came to power, Britain was the biggest threat to French economy as it was able to blockade France, cutting off supplies of sugar and other materials coming through sea.

Mediterranean Basin, where beet was domesticated 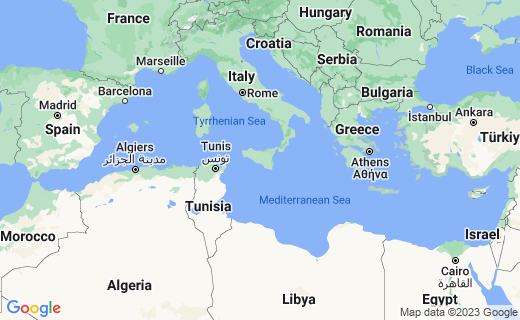 Fortunately for Napoleon, Olivier de Serres, a notable French soil scientist, had discovered sugar in beets by preparing sugar syrup from them in 1590. Later, in 1747 the German chemist Andrea Marggraf discovered that not only some beets were sweeter than others but also the sugar found in them was very similar in its chemical properties to that obtained from sugarcane. However, his discovery was of little use at first and the extraction of sugar from beets did not attain commercial importance for over half a century. It was Franz Karl Achard, Marggraf’s student, who began selectively breeding sugar beet from the 'White Silesian' fodder beet in 1784. By the beginning of the nineteen century, sugar content in those selected varieties was only 5–6% by dry weight, compared to around 20% in today’s modern varieties. Achard's selection is the progenitor of all modern sugar beets.

Under the patronage of Frederick William III of Prussia, Achard opened the world's first beet sugar factory in 1801, at Kunern in Silesia, now in Poland. It did not take long for Achard’s work to attrac the attention of Napoleon Bonaparte. Fearing the British threat, Napoleon realized the potential of beets, which grow in Europe whereas sugarcane does not, as an alternative source for sugar. He instructed a scientific commission to go to Silesia to investigate Achard's factory. Afterwards, two small factories were constructed near Paris. Albeit not being entirely a success, the results attained by these factories impressed Napoleon greatly. In 1811, he appropriated a large amount of money and land to promote and encourage the cultivation of beet in France, by opening schools dedicated to the study of this plant. In 1813, Napoleon prohibited the further importation of sugar from the Caribbean as means of defying the British by making France less dependent on the importation of such commodity.

However, has you may know, Napoleon had a lot in his head to worry about other than sugar. So, before his smart and visionary move could be of much significance, he was defeated at Waterloo in 1815. However, this did not stop the French from improving the extraction sugar from beet entirely. To this end, it contributed the work of Jean-Baptiste Quéruel who developed a process of sugar extraction suitable for industrial application in 1812. In 1837, France was the world leader in sugar beet production. However, after the Napoleonic wars, much of the interest in sugar beet shifted to Germany, where national self-sufficiency was considered a much worthy cause. In the 1830s, German landowners became leaders in using science in agriculture. They performed carefully controlled experiments in the application of fertilizers and the value of plowing and tilling soil. Many varieties were tested and improved to the point of becoming the common biannual plants that are grown today for their large taproots. As result of German efforts, the importance of sugar beet as a source of sugar grew from 5% in 1840 to 50% of the world’s production in 1890. In 1880 German became the largest sugar beet producer in the world.

The relation between sugar beets and world politics did not stop there. The main source of sugar in America was as it is sugar cane. However, after Fidel Castro came to power in 1959, all imports of sugar from Cuba, one of the main producers, were banned. This seriously compromised sugar consumption in North America and increased the cultivation sugar beet in the United States tremendously. Sugar beet was introduced in North America in 1830s, but its use was very limited. On the other hand, the Cuban crisis also caused a problem for the former USSR, the Union of Soviet Socialist Republics, and communist allies. Again, due to political relations, the Soviets were forced to buy the entire Cuban sugarcane crop every year at great expense, even though at that time Russia was already the world's leading producer of sugar beets. Today, sugar beet is produced in more than 70 countries worldwide accounting for about 20% of the world’s sugar production. Russia occupies the first position with about 1/6 of world’s sugar beet production that is still mainly centered in Europe.