Once again, another season of Jersey Shore will be starting on MTV on January 5th, 2012. If you have been counting, this makes five seasons. Yes, five seasons about people partying at the beach (well, one season partying in Italy). For some reason, viewers continue to watch it, so MTV continues to film it. I am going to confess something - I love watching Jersey Shore!

Yes, I know! If you'd ever had a morsel of respect for me (which is questionable), I am sure it has vanished now. However, you must hear me out! The show is not that bad. Basically, in case you've been living in a cave somewhere and aren't familiar with the premise, Jersey Shore is about a group of 20-somethings and their adventures at the Jersey Shore. Each cast member boasts about being Italian and each person is from New Jersey or New York. For some reason, MTV sent them to Miami for the second season and Italy for the fourth season, yet it was still called Jersey Shore. I can't really explain that, but that is not the point.

Many people believe Jersey Shore gives Italian-Americans a bad name, or ruins the reputation of New Jersey (I'm not going near that one with a 10 foot pole!), or is totally useless garbage. I, however, argue that valuable life lessons can be learned from Jersey Shore. It isn't all just about smushing, drinking, and GTL. There is so much more one can learn from watching MTV's Jersey Shore. Let's explore the educational aspects of Jersey Shore. 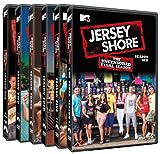 Let's face it, the kids on Jersey Shore love to dance. For those of us that need some pointers, you can dance your way into the club with some awesome moves. Every single person on Jersey Shore has their own special style. When you watch the show, within no time you will be fist pumping like Vinny or doing the Jersey Turnpike like Deena.

As if I hadn't learned so much from the show already with great dance moves, I've also learned some spectacular fighting moves, too. Now I know if I encounter danger on the street, I can hit a person just like JWoww did when she was angry at the Situation. Perhaps I could knock a man out just like Ronnie did that night he got arrested. I've also learned it is best never to ram my head into a concrete wall at the beginning of a fight. It does not improve one's chances of winning the fight at all; it instead merely puts a person into a neck brace for 10 days.

Orange is the New Tan

Tanning can be so time consuming. Furthermore, it can cause skin cancer. The good folks on Jersey Shore have taught me there is no need to put my life at risk anymore just to get a good tan going. Instead, I can get some spray tanner and make my skin darker. Yes, perhaps there is an orange tone to their tans. However, orange is the new tan according to what I've learned from watching Jersey Shore, so that's cool. You can't pick up someone hot at the clubs if you are pale, so you'd better get your spray tan on.

The Shirt Before the Shirt

If you want to look hot at the clubs, you'd better start incorporating a technique called, "The Shirt Before the Shirt" while you are getting ready. Although this brilliant idea originated from the guys in the house, I see no reason why a woman can't give this a try if she wants.

Basically, you don't want to get your best shirt messed up while waiting to some ungodly late hour to hit the clubs. While lounging around the house waiting for your roommates to get ready, you need to wear the shirt before the shirt. Put on an unattractive shirt, such as a wife beater, and then wait until you are about to leave before you put on the real shirt you want to wear for the evening. If possible, sing "It's t-shirt time!" when you are about to go to let everyone know it is time to change shirts and leave for the club.

Where would we be without Jersey Shore explaining some of the important rules of Girl Code or Guy Code to us? No matter how much a girl might think she is friends with a guy, when it comes to her female friends, Girl Code must prevail. If a guy does not understand the rules of Guy Code, such as "taking a grenade for a friend," he cannot be a good buddy. Girls look out for other girls and guys look out for other guys. These are the rules that hold us together as a society. Thank you Jersey Shore cast for continuing to enforce these rules.

Alright, so I pretty much knew this already, but Jersey Shore helped me fully understand it is impossible to move on when you have to see your ex all the time. I worked with an ex-boyfriend once and I understand the torture. Just when you think Ronnie and Sammi have finally called it quits, they get back together because they work together, they are roommates, and they make public appearances together. It is pretty much impossibe to get over an ex in that situation. This is why the Ronnie and Sammi drama continues every season.

Secrets Should Not Be Shared on Camera

Guess what? If you look straight into any camera that is filming and share your secret, it is not a secret anymore. This is especially the case if you are filming a show called Jersey Shore and eventually your roommates are going to watch the program. Later, when the next season is filming and you are living with the exact same people, something tells me that is not going to go well. Just sayin'.

As if all those things were not enough, there are a number of little things I've learned from watching Jersey Shore for four seasons. Some of the many nuggets of important information I've learned includes:

I hope you have found all of this information just as useful as I have in life. Even if you feel there is nothing of value to be learned by watching Jersey Shore, you should still watch it anyway. Even if you pretend not to like it, I'll bet some part of you is still curious to see what Pauly D and Snooki are up to when the show starts again.