I've said it before, I'll say it again: I don't feel that enough players die in a typical game of Munchkin. A handful of my other custom cards (Ritual Knife, Ritual Sacrifice, Genocide, Necrophillic Amulet) either promote or thrive on player death. It's one of the most drastic events in the game (aside from winning) and a lot of time, it assists in a re-balancing of power.

"When this card is played, everyone rolls a die. Lowest roller dies unless they can stop this Curse." When this card is played, things become much more flexible than it seems. While tension is high, players can use cards and abilities to alter their (or another player's) die roll, and even if they fail, they can stop the Curse with anti-Curse gear such as a Wishing Ring (or use the Hex-Direx Gloves to screw another player over).

Curse! Roulette! is likely my most direct method of player killing. While I won't make a card that allows you to simply kill another player (that's too powerful and cheap; there must be some strategy to utilize the mechanic or to avoid it), this card enforces the concept of Russian Roulette.

The best part of this card? Even if it ultimately doesn't kill anyone, everyone's heartbeat will noticeably slow when it goes into the Discard Pile.

If you plan on playing this card, you want some kind of insurance. Loaded Die cards are pretty simplistic, or perhaps playing Curse! Today is Not Your Day on someone else is more of a sure thing.

Also, depending on how you treat this card as a Curse or not (look below), it's also not a bad idea to have some kind of player-caused Curse protection (as opposed to the Sandals of Protection).

What, is this a Treasure? A Door? Or a Curse?

Truth be told, I originally meant this to be a Curse card but accidentally transcribed it to a Treasure card. That being said, this card, when correctly labeled, can be used on either platform and can activate immediately when Kicking Down the Door as a Curse card.

That being said, it's better to be wary when it's a Curse card, or at least you'll need to elaborate on the card for some particular card match ups. If the lowest roller is wearing the Magnificent Hat, does that mean the second-lowest roller gets hit? Or, does it mean that everybody else has to reroll? Does someone play a Wishing Ring before everyone starts rolling to exempt, or after to completely nullify it when it falls on them?

There can be more than enough interpretations to this card, and unfortunately it's one of my roughest. Hopefully you can take it and figure out exactly what to do with it. 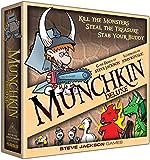 This card works with any deck and has more of an impact with decks with fewer Curse protection (such as any base deck) or with Decks that have so much negative effects that can be stopped by Wishing Rings, as to use up the precious commodity.

However on the flip side, decks with more than a few expansions will introduce Reloaded Die cards and more Loaded Die cards. It creates more of a prolonged struggle to avoid Death as multiple players end up on the chopping block.