When I was a little girl I shared ownership with my brother of brown and green plastic army men. But not only did we have the army men with their guns and the various poses, we had the full artillery of tanks, machine guns, and army trucks.

Though he was seven years older than I, we would spend hours playing with these army men. The only problem I had was that I was never allowed to win. I would kill one of his men and he would say that I missed by a mile. The green men always went to my brother as well. Not that I preferred the brown men. But I did make up for it when friends were over, I was the green army and we took turns winning.

The day came when my brother moved out of the house. Along with him moved out our army men, and the cowboys and Indians, despite the fact that these toys were half mine. To this today, I don't know if he still has our plastic army fighting toys.

The original toy army men were made of tin, lead or zinc. These tin soldiers were popular in the late 1800s. The army toys mainly came from Germany, followed by England and France.

Around World War 1, American makers began producing these toy figures. The plastic toys were creations of soldiers of Civil War, Cowboys and Indians.

In the 1950s, these tin soldiers changed over to plastic. This allowed makers to produce safer and cheaper toys. This was the start of the plastic army soldiers they were sold in plastic bags, as we know it today.

Most popular in the late 1950s and early 1960s were non-brand types and a very common sort with very flat feet and no stands. These were mainly products in Taiwan or Hong Kong and then exported them. Army Men were sold in every toy store. Every plastic bag included troops, a flag, and vehicles. Jeeps, trucks, half-tracks, cannons and tanks were usually included.

The brand types came from Louis Marx Inc, a large toy manufacturer and Ideal. Some soldiers came with ring hands and separate weapons to add to their hands.

The 70s saw a decline in war toys, though they grew in popularity again in the 90s. Green army men were also among the characters in the 1995 Disney movie, Toy Story. Thus giving these toys a large boost.

Toy Story & Toy Story 2 (2 Pack)
Watching the toy army men in Toy Story brought back memories of my own childhood, spending hours building up my army and fighting the enemy...my brother.
Buy Now

Love the Detail in These Toys

What I loved about the plastic molded army men was how detailed these toys were. One would think that these were made for adults, rather than children.

The modern army man has flesh colored faces. Though I have yet to see army women.

I may still play with these army men toys. Behind closet doors. Please keep this a secret. We would not want it to get out. 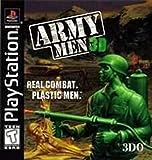 Do You Have a Set of Army Men?

For all you action figure collectors, here is a one of the best places to go on the internet to find and buy items for avid collectors called The Collectionary

Other Articles with Fun

What was your favorite childhood toy?