Breast Cancer Treatment - What Else They Don't Tell You About: Shingles and Radiation & More

A Brief Look Back

It is not uncommon for cancer patients, due to their weakened immune systems, to develop Shingles.  Had I been told this at some point in my treatment, I would have sought medical attention right away when the sore spots in my armpit began to welt!  I thought it was just my radiation treatment wounds healing - so did my Oncologist.  It got a lot worse - it spread over my left breast and down the inside of my arm from my armpit to my elbow - some seemed like bites and they itched like MAD!  I got on the computer in the middle of the night and became convinced that I either had bed bugs or scabies!  A week and a half later I saw my Radiation Oncologist for a follow up and she took one look and immediately said "Oh Boy, You have Shingles" - okay, actually what she said was that I had Herpes Zoster.  All I heard, though, was "Herpes" and I freaked out ... until she told me that Herpes Zoster is the scientific/medical term for Shingles - whew!  I was actually relieved that it wasn't scabies.  I had no pain, just itching so I thought it wasn't too bad. She started me on medicine.  I took to the computer and started researching.  I found out that Shingles is best treated when you start the medicine within 72 hours of the rash showing up - DAMN! See? Had someone somewhere along the road told me of the possibility of getting Shingles I'm convinced I would have sought treatment for them right away. It's been a horrible experience - they itch enough to drive you mad - really, truly mad!  That's not even the worst of it - after about six weeks of having these Shingles, I woke up one Friday in serious pain all over and swelling in my armpit the size of a tennis ball. I went to the ER and ended up confined in the hospital for a week!  The doctors told me that I had a Staph infection, not MRSA, thank goodness. 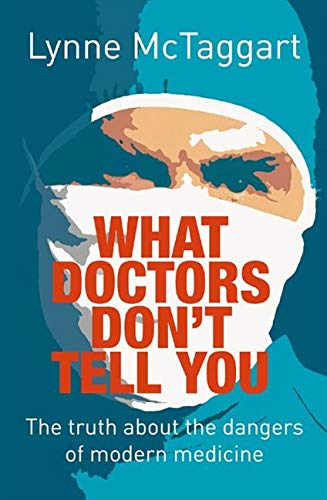 What Doctors Don't Tell You: The Truth about the Dangers of Modern Medicine
Buy Now

I am finding out the hard way that some doctors just don't know everything (duh!) and you cannot just take their word for it when they tell you that you have this or that.  Sometimes you just have to question everything.  Researching online what the doctors told you does not always help, either.  At times, you just might need to get third and fourth and fifth opinions.

I feel like I should have been featured on that Discovery program "Mystery Diagnosis".  Sometimes this is just the medical course that has to take place to get to the bottom of what ails you.  The fact that I was told that I have breast cancer at the age of 37, had immediate surgery that deformed my left breast, packed my house and moved 3300 miles, went through chemo, lost my hair, gained 30 pounds, then had both my breasts removed in an 11 hour surgery, received radiation therapy - all within one year was apparently not enough!  Someone out there wants to pile more on my plate...

After 8 weeks of suffering, I go for a follow-up visit to my Oncologist and she, like me, has had just about enough of this rash! She sent me to see an Infectious Disease doctor and he tells me that it looks a lot like Shingles, but he's never seen nor heard of shingles appearing on the radiation site like this rash I have; he said it may just be an allergic reaction to the radiation! He sent me to a dermatologist for a skin biopsy. The dermatologist and said it could be a severe case of radiation dermatitis! She told me that although Shingles can last for several months with some people, it's the persistent nerve pain that lasts; the actual rash usually subsides in a couple of weeks. Well why is this the first time I'm hearing THIS I think to myself!! She takes the skin biopsy and tells me to come back in a week.

In hindsight, when I went to the emergency room that dreadful Friday morning, why didn't anyone question me when I told them that I have shingles?  I'm no doctor!  They believed what my doctor told me just as I had believed it.  They had an infectious disease doctor come see me everyday for that week I was in the hospital and he never even questioned it!  Why wasn't some sort of culture or biopsy done THEN to confirm what this rash was!

It is now mid August and it has been almost 9 weeks of suffering.  The dermatologist told me yesterday that I definitely do not have Shingles.  I do have a bacterial infection - something impetiginous (impetigo) which may have been brought on by the Staph infection I had a few weeks ago.  In addition to that, the rash is some sort of allergic reaction to SOMETHING!  She took a culture which I guess will help further identify the bacteria - or the allergy - who knows!  She gave me a topical steroid cream to help the rash and itch (finally something to help the itch!), another topical ointment for the bacterial infection and an oral antibiotic - Amoxicillin.

AMOXICILLIN!  Nothing unusual, just your everyday penicillin!  I am scared and hesitant to say this, but after a day and a half of this new regimen, I think it's actually improving!  I've seen no improvement in the past 9 weeks, until now...

What I Have Learned

If something doesn't seem right, feel right, look right - question it and get another opinion, and another, and another!

I don't blame my Radiation Oncologist who was the first to say I have shingles - although I did ask her that day if I should make an appointment with someone for ongoing care of the shingles and she said it was not necessary and gave me a prescription.  Well, maybe I blame her a little, but I'm just as much to blame for not figuring out what kind of doctor treats shingles and getting that second opinion.

I don't blame my Oncologist, either.  She's wonderful and so very caring - even though it happened after 8 weeks, SHE is the one that said 'enough is enough, we need to do something about this'!

Like I said before, I could certainly blame myself for being too trusting of the doctors' words, but I think the hospital staff was too trusting of MY words.  Afterall, they were monitoring me 24/7 for a week and checking my blood constantly - why oh why didn't ANYONE there think of confirming if it was actually shingles or not!

...what they don't tell you is that not all doctors know everything. No matter how much they care and seem knowledgeable and how much you trust them, they just can't possibly know everything. So, if you ever find yourself in a similar situation, or even not so similar be sure to remember this:

"It is not a case we are treating; it is a living, palpitating, alas, too often suffering fellow creature". ~John Brown