By definition: COPD {chronic obstructive pulmonary disease} is a chronic respiratory disorder characterized by shortness of breathing and airflow obstruction on slightest physical exertion due to respiratory insufficiency.

This respiratory insufficiency is seen when the patient experiences the difficulty of gaseous exchange due to loss of elasticity & contractile capacity of lungs.

It is a major life-threatening disorder of the human body's respiratory system, as per WHO statistics on COPD. It is the 4th leading cause of death in the U.S in both men and women. By 2020 it is expected to be in the 3rd position. So this signifies the level of severity of this disease.

The COPD treatment and management aim to decrease the rate of exacerbation of the disease, lead a comfortable lifestyle, and prolong the patient's life expectancy.

Pathophysiology: This lung disease results from damage to alveolar tissue either due to smoking, recurrent infections (including common cold), emphysema & bronchitis, irritable inhalants.

Normal breathing occurs using inspiration and expiration, wherein gases are exchanged into and outside the lungs, respectively. This is effective as long as the elasticity and contractile capacity of lung tissue is well maintained.

In the condition of chronic obstructive pulmonary disease (COPD), this elasticity or contractile capacity is lost, leading to insufficient expiration. De-oxygenated air is accumulated, exchange of gases is minimized, resulting in hypoxia & suffocation.

This loss of elasticity in the lungs continues leading to difficulty in exertion, heart stroke, and suffocating death. 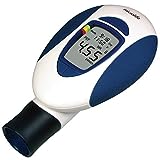 This COPD is pathologically characterized as
1) Pulmonary emphysema
2) Bronchitis.

In pulmonary emphysema there is accumulation of gaseous air sacs in and around the lung alveolar tissue. This decreases lung elasticity and respiratory volume.

In bronchitis there is inflammation of entire respiratory tract either due to infections or irritable inhalants. Most probably this is due to Bacterial (especially Gram +ve) and sometimes Viral infections (common cold).

The process of tissue destruction starts even right from child hood, teenage when affected by infections like cold, flu etc. And the symptoms are evident in elderly and old age people at times of physical exertion.

The prominent Sign and symptoms of the disease include

2) Congestion and accumulation of air due to improper expiration.

3) Cyanotic and suffocative appearance due to hypoxia and low oxygen supply to tissues.

5) Tendency to wake up while asleep for want of air, tries to lean forward while sitting for breathing,

6) Profuse phlegm accumulations, rattling sound of phlegm or mucous in chest, cough due to least irritation of bronchi.

The disease is incurable and only treatable so, the treatment or therapy aims to provide comfortable normal life style and also prolong the life expectancy to the patient by decreasing the rate of COPD exacerbation or further damage.

♣ Attitude and optimistic outlook: are foremost requirements to lead a normal life expectancy with COPD. As per some reports people have survived for 30+ yrs with COPD.So have sufficient mental strength and the will to take the necessary measures & guidelines prescribed by your physician to control it.

♣ Diet and nutrition: To get recovery from the inflammatory damage and also build up body mass during the condition, have food rich in proteins and essential nutrients. Avoid oily food and excess carbohydrate foods like sweets. Having oily, spicy food aggravates cough, phlegm and inflammation.

♣ COPD prognosis: A regular prognosis and diagnosis of the disease is important to know the stage of COPD. For this go for checking of your respiratory volume, body mass, oxygen levels of tissues and also phlegm examination for infections.This gives an idea of how to manage the disorder and limit the exacerbation rate better.

♣ Breathing exercises for COPD: (Pranayam or meditation): These give prominent relief from suffering in the COPD condition. The main problem comes not by inspiration but with expiration. The expulsion of de-oxygenated gases from lungs is not efficient due to lack of muscle contractile capacity. So the accumulated gas makes you feel congested and lack of sufficient oxygenation. Breathing air in and out with slow and conscious effort for 10 to 15 min at every 2 to 3 hour intervals gives you immense recovery from congestion and lack of oxygenation.

Sitting- Try to sit in a fashion where in you bend forwards and rest your head on your hand over a pillow. This posture gives you relaxation as there is decrease in load on lungs and freedom for them to inflate freely. Even the abdominal weight doesn't restrict breathing by the lungs in this posture.

Sleeping-Try to sleep or lie down on your side instead of on your back or belly. Because this posture helps your lungs inflate and contract freely without other loads on them.

♣ Clear the airways: Clear air ways from accumulated phlegm or mucus and stay in places of dust free air. Phlegm accumulation is a common symptom and it is difficult to clear if it is of thick in nature. Have sufficient water to loosen it, stay in dust free air and you may try to expel it by coughing. You can use mucolytics for your aid to clear the phlegm. Huge or frequent phlegm formation indicates infection.
Physiotherapy may be useful to clear the airways.

♣ COPD Medications or drugs: As per me this should be a lost resort except in cases of severe or aggravated cases, The treatment may focus on bronchitis or emphysema. Use of
broncho-dilators in the form of nebulizers, inhalers to provide aeration, steroids to control inflammation, antibiotics for infections are advisable. But in normal situations or less severe conditions resort to deep breathings, cleanliness of airways of phlegm, good diet, stay in dust-free environments and thereby avoiding addiction to drugs.

COPD inhalers are of Bronchodilator types: These are

These inhalers can provide immediate relief from severe congestion.

Only in end stages of COPD, you may require the support of ventilator and oxygen therapy to assist aeration and sometimes COPD surgery i.e. lung transplantation is advisable to continue life for few more years.

♣ Control recurrent infections: Be careful with recurrent infections as these can drastically
damage lung tissue and reduce the years of life expectancy. This is the only way for the acute COPD exacerbation. Most chances of infection are seasonal colds, non seasonal infections like T.B and other G+ve and G-ve bacterial infections. Having regular diagnosis checks of your sputum and use of suitable antibiotics can control infections.

Even rise in phlegm production also indicates infection, so be watch for infections.

♣Quit smoking: This is the primary step to be taken. Smoking burns your lung tissues and once burnt there is no return or recovery from it. So be aware and try to quit this habit even if you don't suffer from any disorder presently. Quitting smoking will give you intense and immediate recovery from most of the symptoms of COPD. Smoking during COPD enhances cough, phlegm accumulation and gaseous engorgement in the lungs. So symptoms gets aggravated causing difficulty to breathe.

♣Avoid emaciation: The COPD patients in general show severe atrophy and loss of body mass.This may be due to requirement of excess energy in breathing than in normal condition which makes body drain the accumulated calories and nutrients. So have sufficient diet comprising of protein rich foods and nutrients.

♣ Keep watch on climate changes: The symptoms of COPD are aggravated during winter and cold moisture rich environments. So keep a watch on the patient. Provide warm clothing from head to toe. Avoid exposure of feet to cold climate because the blood distribution shifts to legs and to that of lungs and heart is decreased. But lungs require more supply during these conditions.

♣ Family support: Family support at this stage is important for mental well being and optimism towards normal life. Try to notice for rise in body temperature (may indicate infections), help them during walking, provide requirements like silence, dust free environment and proper nutrition.

These treatment and management guidelines help in better life style of COPD patients both mentally and physically in comparison to COPD rehab centers..