Apple is one of the most widely available fruit in the world. Apples are found in almost every country of the world. It is also one of the favourite fruits all over the world. Apple can be eaten raw or can be cooked in various dishes. It can also be made in to jam. It can also be used in sugar syrup. Apple juice is also drank all over the world and is considered very good for the body. Apple is very useful for the body. Not only it is not very costly but also liked by all from children to adults to old people. It can easily be digested and doesn’t contain many calories. This humble fruit comes in many colours from red to yellow to green being most common. Apple is so good for the health that people say An apple a day keeps the doctor away. A medium sized apple contains 4 grams of fiber which is very essential not for digestion but also keeps the gut healthy. 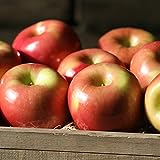 1. Teeth: Since apple is a hard fruit and if eaten uncut, it stimulates saliva production in the mouth, which in turn reduce the chances of tooth decay be caries and lowers the level of bacteria. Also biting and chewing on apple makes teeth self cleansing as it is not a fine food and also help in exercise of muscles of mastication like Massater Muscle.

2. Apple in Alzheimer disease: In a new study, it has been found that apple juice is very good for the mental health. Not only the apple juice delays the aging of the brain but also fights Alzheimer’s disease. In the experimental mice it was found that the mice fed with apple juice had higher levels of neurotransmitter acetylcholine which is essential for the functioning of brain but also these mice performed better in many tests than those who were on their regular diet.

5. Fighting Cancers: Apples are very rich source of Flavones. According to scientists of American Association for cancer research agree that eating foods rich in Flavonols does reduce the risk of developing the pancreatic cancer by more than 20%. Also Apple is a very rich source of trierpenoids . This compound has natural anti cancer growth activity. This compound help fight the free cells in the liver, breast and colon which can turn cancerous. Thus eating apple does reduce the chances of cancers in colon, breasts and liver. Also according to National Cancer Institute in the United states of America a high fiber diet reduce the risk of rectal cancers.

6. Type 2 Diabetes : Though it helps in both sexes but the result in woman are more. Those women who eat atleast one medium size apple a day have more than 25% less chances to develop type two diabetes. Since apples are loaded with soluble fibers and soluble fibers decrease the chance of sugar swings, thus apple help fighting Tpye 2 Diabetes.

7. Heart: As discussed above, Apples have high soluble fibers which lower the cholesterol levels. Now Cholesterols are like plaque which deposit in the lumen (hole) of the arteries and thus making the lumen small and also decreasing the elasticity of the artieris. Thus heart have to pump harder to send blood in the distant parts of the body. This leads not only to high blood pressure but can also lead to heart attacks.

8. Gall Stones: Again cholesterols can be present in the bile. And also they collect in the gall bladder and make crystals which are known as stones. Stones in gall bladder are very painful and can also create emergency if they go down in to common bile duct and block it. Then an emergency operation might have to be done. Since apple reduce the level of cholesterol thus they also help in fighting gall stones.

9. Digestion: Apples are very rich source of soluble fibers which not only help in digestion but also fight constipation and diarrhea. Apple also neutralize the irritable bowl syndrome too.

11. Weight: We all know how bad being over weight can be for health. It can give rise to breathlessness, heart attacks, high blood pressure, type 2 diabetes etc. To control weight a high fiber diet is advised by most doctors and since the apple are one of the richest source of fibers, thus they are very good for keeping your weight down.

12. Liver: What ever toxins a body consumes, it is excreted through the liver. So most doctors advise a rich fruit diet for the liver. And apple is the best fruit for the liver detoxification.

14. Cataract: Since apples are rich source of anti oxidants and anti oxidants are suppose to fight cancers and studies have shown that people those who eat apples regularly have more than 10% less chances of developing cataract. Thus apple is very essential for the health of the eyes too.

So the saying that an apple a day keeps the doctor away is not wrong since apple is so rich in nearly everything good for the body and has countless health beneficial ingredients.

Disclaimer: I am not a certified doctor or dietician.. So please check with your doctor about its medicinal use and side effects . I have only written what can be benefit of this humble food if included in diet. Thanks

5 out of 5 stars from 8 ratings of Apples