Blood Diamonds: Tracing the Path of the World's Deadliest Stones-- A Book Review

By now, most people know about blood diamonds. For those that don’t, the term “blood diamonds” (sometimes referred to as "conflict diamonds") is a slang term for diamonds that are mined and sold from war torn countries to fund civil wars, coups and general unrest, resulting in innumerable deaths and mutilations, mostly in Africa, and predominantly in Sierra Leone. Freelance journalist Greg Campbell was one of the first to bring these rocks to light in his meticulously researched, gut wrenching and terrifying book, Blood Diamonds .

Even though the vast majority of diamonds come from legitimate sources, the origin of most, if not all, diamonds, even with the latest protocols put in place, are nearly impossible to trace. As the book infers, if you buy a diamond, you could very well be paying for a rock that helped fund Al Qaeda (author Greg Campbell was conducting his research embedded in Sierra Leone when the terrorist attacks of September 11th 2001 occurred) or Hezbollah or cost a young man his family and his hands, or even his life.

Campbell was an eyewitness to innumerable tragedies and painted a picture of the diamond trade that is both sympathetic to the miners and scathing to the warlords, primarily the Revolutionary United Front (RUF). He also brilliantly portrays the humanity of all those involved, from the youngest and most innocent infant to the most ruthless of child soldiers to the most despicable and vile murderer, and that is the book’s strength. It is not quick to judge and does a fantastic job of being objective and fair to all parties. Although Campbell makes his objective and opinion clear, as a professional journalist, he doesn’t let this get in the way of reporting his well-researched facts.

The historical portion of the book was the most interesting. He explains how the diamond went from being a hard, inexpensive rock that was pretty much used only for industrial purposes to being a very expensive symbol of love, devotion and permanence. The price of diamonds was artificially raised through brilliant ad campaigns by the diamond cartel, the DeBeers Company and through business practices that could be seen as monopolistic and are certainly unethical (in fact,the DeBeers company, at least at the time the book was published, is not allowed to operate within the United States).

The book is a page turner and could easily be read in a day. There are a few graphic scenes of violence but these are handled with dignity and could be skipped or skimmed without losing the focus or point of the book. I recommend reading them for the full effect of the book.

Blood Diamonds should be read by everyone (and worn by no one) multiple times. In lieu of reading, or to supplement your reading you could also watch the film Blood Diamond (starring Leonardo DiCaprio and the lovely Jennifer Connelly), which borrowed heavily from this book. Then again, if you would like to stay ignorant about where our jewelry comes from so you can continue to purchase it without feeling guilt, then don’t read this book. As for me, the risk is not worth the reward. I will never buy a diamond. I can’t. Not after reading this book.

Tracing the Path of the World's Deadliest Stones 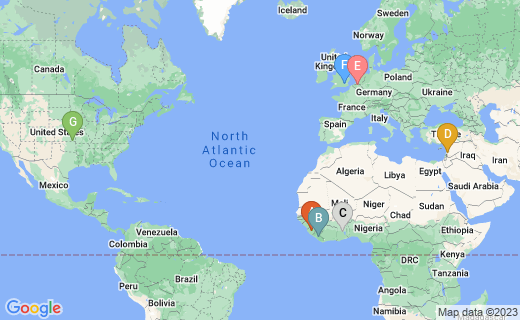 The diamonds originate here, where they are mined by slaves or severely underpaid workers, working in intense heat, seven days, dawn to dusk.

They are then smuggled here

And often distributed to terrorist organizations, such as Hezbollah, located in Lebanon.

Then cleaned in Antwerp, primarily by the DeBeers Diamond Cartel

And finally, to the US, where the majority of the world's diamonds are purchased.

Get the Book Here

A FREELANCE WRITER, HONORS STUDENT AND GOVER PRIZE FINALIST, JUSTIN W. PRICE (AKA, PDXKARAOKEGUY)IS A POET, SHORT STORY, BIOGRAPHY AND HUMOR WRITER. HIS POETRY COLLECTION, DIGGING TO CHINA, WAS RELEASED FEBRUARY 2ND, 2013 BY SWEATSHOPPE PUBLICATIONS AND IS AVAILABLE ON AMAZON.COM, BARNES AND NOBLE AND THROUGH YOUR LOCAL BOOKSELLER.

Some of my Other Reviews