The Top Free Games For Android 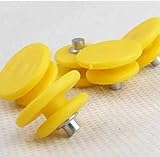 This free version of Microsoft's Flight Simulator for your android device gives you the chance to fly around the world using your phones tilt controls.

The controlled can be a little hard to get used to at first but this is a must for all you armchair pilots out there.

This is a great racing game that puts you in the driving seat of lots of great cars. It also has lots of real tracks to race around and even gives you the chance to race in Nascar races.

This is a great free game set in the Star Trek Universe and a must for all Star Trek fans. It has characters from all but the JJ Abrahams incarnations of the franchise.

The top licensed football franchise is now available for free on Android. With great graphics and an easy touch control system this game will have you hooked.

It is a game that fans of the Fifa Franchise should have on their android devices.

This is a very addictive Strategy Game where you have to kill the world population with a plague before the scientists come up with a cure. There are different plagues and levels of difficulty it play through. You will find yourself glued to the game for hours trying to win.

This game needs no introduction and if you don't know about it you most have been hiding under a bush for the passed few years.

It is one of the most highly addictive physics based games around and it has now made its way onto PC, Console and even Smart TV's.

This is one of the best free racing games on Android.

It is fun and addictive with some great tracks and cars to race.

Each race has a set of goals for you to achieve which earn you stars. The first three stars are to do with you finishing position and the others are for pacific goals, like drifting and doing stunts off the ramps around the course. You control the car by tilting the device and press the left side of the screen to drift and the right side to use NoS.

The only problem is the amount of free space you need to download the data and sometimes the updates don't want to download.

This free android game is based on the Xbox 360, PS3 and Wii U game Injustice Gods Among Us.

It works on a similar lines to the console version and is a really good combat game.

All the characters are here for you to fight with and against, you just have to earn them or buy them with in game credits that you earn through fighting.

Graphically it pretty good and the game itself is easy to pick up and play.

If you have been thinking of getting the Console version then I recommend you try this free game first.

This is the forth game in the series by Future Games of London or FGoL.

The game is simple. You control a shark and have to keep it alive by eating everything that you can. It is a fun, addictive games that could have you entertained for hours.

There are missions to complete and daily bonuses to collect.

This is another great installment in the Hungry Shark series of games.

This is an open source remake of Transport Tycoon Deluxe that came out on PC years ago. It has all the features of the original and more to boot.

It is one of the best Business Simulation/ Tycoon Games available for free on Android and it is also available for the PC as well.

It is all about connecting Towns, Cities and Businesses and transporting passengers and goods between them.