What began in the late 1990s as a dream to substantially alter the economic basis of the City of Garfield Heights — from a ‘city of homes’ with little industrial or commercial tax base into a commercial and office mecca — has today become a nightmare that has placed the city’s economic future in doubt.

City View, a massive big-box retail center along extended Transportation Boulevard at Interstate 480, was intended to bring customers, substantial peripheral retail and restaurant development, and encircling office parks to a high bluff overlooking the Cuyahoga River Valley. The underlying problem, however, was that the high bluff in question was in fact nothing more than a poorly constructed and managed trash landfill.

City View was originally planned to host such tenants as a dental clinic, Panera, Home Depot, J.C.Penney, Chick-fil-A, Dollar Tree, and Buffalo Wild Wings, none of which ever arrived. And many other substantial tenants that opened at City View — Walmart, Circuit City, PetSmart and Jo-Ann Stores, among others — have since shuttered their stores. The predominately vacant center is now a poster child for what can go wrong when one underestimates either the severity of environmental concerns or the volatility of the retail markets.

The Environmental Protection Agency has repeatedly cited City View for environmental violations over pollution, tainting of runoff and groundwater, unvented trash, methane build-up, risk of fires and explosions, and hazard to the public. The Agency has also sued the center’s developers and the City of Garfield Heights to halt or shut down the project, or enact ever more stringent environmental protection standards. As a direct result, the center has defaulted on its original mortgage, and a outside property manager has been appointed by a federal judge. City View’s problems have also been compounded by bad press, and by the competitive pressures of other regional retail centers such as Steelyard Commons, Harvard Park and others.

On an sadly ironic note, City View has effectively obliterated the City of Garfield Heights’ panoramic view of the Cuyahoga River Valley beyond, for its string of now-mostly-vacant big retail box stores are aligned in unending lockstep along more than half a mile of high bluff, with their back walls and truck docks partaking of the valley view. 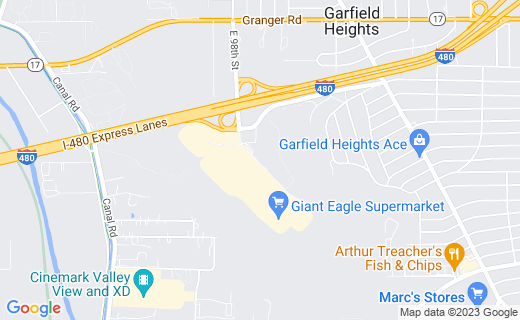