The Waterfront Line through Cleveland's 'Flats'

When it first became operational in 1996, the Waterfront Line was a symbol of Cleveland’s resurgence, and a commitment to the future development of its Lake Erie waterfront and the nearby scenic ‘Flats’ areas along the winding Cuyahoga River. Unfortunately, however, for a decade and a half, it has also seemed to many a symbol of a financial boondoggle.

Turn back the clock to 1996, and Cleveland seemed on the cusp of significant urban revitalization. The lakefront had seen the addition of I. M. Pei’s Rock and Roll Hall of Fame and Museum and the neighboring Great Lakes Science Center (with its IMAX cinema). Jacobs Field had been packing in sell-out crowds through one World Series, and would soon repeat the feat. Gund Arena (now Quicken Loans Arena) was hosting sizable Cavaliers crowds (though nothing like what now gathers around LeBron James). Plans were afoot for significant reinvestment in mixed-use development in the Flats, and in a new waterside facility for The Cleveland Browns.

In this atmosphere, the Regional Transit Authority (RTA) trumpeted the Waterfront Line as a bold new gesture toward the Lake. The Waterfront Line, which curled out from under The Terminal Tower to the Cuyahoga below, thence north and east, to link to development areas along the river and on the shores of Lake Erie, joined RTA’s Red, Blue and Green Lines, which already radiated east, southeast and southwest to serve the city’s population. That network of light-rail transit remains one of the largest in the nation, and one of the few linking a city’s core to its international airport.

In its first year, the Line lived up to the hype, meeting or exceeding ridership projections. But then the doldrums hit. The Flats fell on hard times, as the popularity of its nightspots faded, with rowdiness and crime crowding out patrons. Riverfront and lakefront developments, both commercial and residential, were snagged by financing woes, acquisition delays, and leasing fallout. The Waterfront Line’s gleaming stations remained unpopulated and its cars became ghost trains.

But, with the slowly recovering economy and some key recent announcements, the Waterfront Line may once more live up to its promise. The City administration has renewed its commitment to dynamic riverfront and lakefront development, and has invited participation of all citizens. A new office tower with related support facilities will soon break ground on a Flats site. Additional downtown residences and parking facilities on or near the Line continue to open.

Perhaps once again soon The Waterfront Line will symbolize the ascendance of Cleveland’s birthplace, where the Cuyahoga meets the Lake. 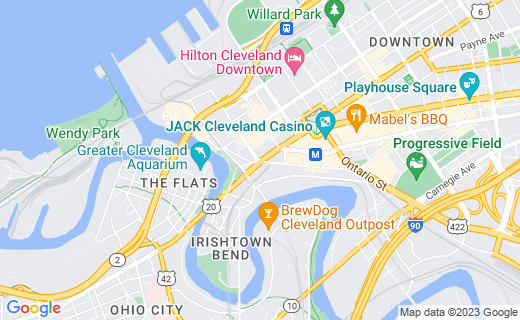