Eros and Psyche, a Cosmic Legend on Love and Light

Katerina Kostaki is a Greek visionary author, poet, healer and speaker.Owner of the ACADEMY OF INNER LIGHT Network.

A legendary walk in the Ancient Greek Mythology

In Greek Mythology, Eros appeared as the son of Aphrodite and Mars, a primitive God like Dionysus who was sometimes referred to as Eleutherios, "the liberator".

Eros was principally the patron of masculine love, while Aphrodite ruled the love between a man and a woman.

In Hesiod's Cosmogony, Eros sprang forth the primordial Chaos together with Gaea, the Earth and Tartarus," the Underworld".

In many cases, he was an attendant to Aphrodite harnessing the primordial force, which constituted a kind of a combination of love , war and fire, and directing it into mortals.

The most famous myth of Eros was the myth of " Eros and Psyche".

Apart from the written notes based on facts of the myth, there are many symbolisms and interpretations that can be given in this myth.

This can be achieved through his exploration that conceals longstanding facts based on self-knowledge and mental development of the human being.

All rights reserved of the mentioned text.

only when provided with the details of the author 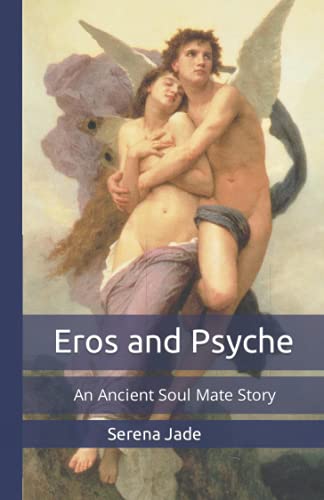 Eros and Psyche: An Ancient Soul Mate Story
Do you have the courage to reach for your deepest most-profound eternal love? A divinely cool, gentle breeze comes over the mountains and wraps Psyche together with Eros. When you take a look at this painting, you know immediately that Psyche is totally fulfilled. She has been abducted by Eros, the ultimate spiritual connection. This abduction is not a negative, but a positive reaffirming of Eros’s love for Psyche. They are a purely spiritual couple both wrapped in deep purple, symbolizing royalty. After their long, arduous time apart from one another, the twin souls are now reunited on earth. Clearly, they have never lost their heavenly bliss.Eros and Psyche is a story about Psyche (soul) and Eros (an exalted bond of love). Psyche (regardless of gender) has to travel into the depths of the mind in order to be worthy of such a profound connection. Do you have the tenacity to travel into your mind for a twin flame?
Buy Now

"Psyche was born in a magical land from a beloved couple, who had acquired, except for Psyche, two other daughters.

While their two daughters were ugly, Psyche was very beautiful and captivated the world, to such an extent that people began to adore her more than Goddess Aphrodite.

Her beauty dazed but it frightened as well because it seemed to come from another world.

Despite her beauty, she seemed sad, because both of her sisters were married and she was single.

Thus, she secluded in her house away from other people.

Her parents consulted the Oracle of Apollo, in Miletus, in order to learn about the fate of their daughter.

The oracle said that Psyche will not marry a human being, but a winged serpent.

The Oracle required to lead the soul to the highest, and the most distant peak of a completely deserted mountain.

Her parents should leave her there to wait this awful husband.

Thus, it happened like this: Psyche was all alone on the peak of an unfamiliar mountain, dressed up as a bride, as the oracle of Apollo had said."

Psyche had gained the ability of transcendence, and was destined for something noble.

She had to be released from her past, in order to fulfill her destiny and look for her True Self.

The Oracle spoke of a symbolism,"The mountain where it will approach the heavens away from Earth".

There is an uplift in an alternate spiritual sphere that dominates Light. Sun God was worshiped by humans at the peak of the mountain like Prophet Elias later on history .

However,it was a spiritual peak.

Psyche was not just looking for a single mate, but for a clue beyond the realm of human experience, since she felt a kind of Intellectual Solitude.

Her spiritual quest was associated with the shift to her Inner Cosmos, and her gradual departure from her external world....

"When Psyche arrived there, she didn't see the monster that she was waiting for.

Eventually, Zephyrus, the wind, appeared who took her in his arms and led her to a distant dreamy garden.

A crowd of servants, who remained invisible, was waiting for her there in order to serve her needs.

This evening Psyche retired in her room where she met an unknown, mysterious mate, with whom she had sex with.

But, the next morning, he disappeared as unexpectedly as he came.

The days went by, the same as usual for her, without even seeing her servants and her mate.

Then, she began again to feel nostalgia and loneliness. Thus, she tried to persuade her partner to allow her sisters to come home and visit her.

If this disclosure happens, then she will be in danger of losing him for ever.

Psyche knows that she is pregnant and her mate reminds her that, if she respects his wish, the child will become immortal.

Otherwise, the child will remain mortal".

Psyche has turned to her Inner Cosmos , impelled to begin her personal quest and thus discovered the Divine Spark.

That is to say, a unique and magical world was in fact threatened by the pull that the past exerted on this happiness.

Her sisters were the regression to the past, the regress to old patterns.

Her gestation is the pregnancy of her New Self.

However, Psyche lacks self-knowledge and she must fight with everything that prevents her from being in the path of self-development.

She should find out points of the past in order to achieve her purpose. She should also fight with her sisters, win them and continue her triumphant path to the spiritual development.

Will she be able to achieve her purpose?

Cosmic Light
Cosmic Light is a spiritual book of poetry, written and published primarily in Greek language in Athens ~ Greece (October 2008). Its original title is Sympaniko Fos . Its a hymn to Unconditional Love and Compassion, a legend for Eros and Soulmates, a new perspective of our astral origin and evolutionary path to Light that underlines humans willing to reconnect with Cosmic Consciousness, a commitment with Destiny and Higher Good according to a Divine Plan. Poetry is a vivid spiritual gate. However the magical sense that a reader derives from the poetic travelogue could be described but only an intellectual, Divine River of Dreams, Light and Unconditional Love”."
Buy Now

The revelation of True Love

"The desire of Psyche was fulfilled and her sisters arrived in the magical garden with the help of Zephyrus. They see Psyche alive there.

They are dazed by the beauty of nature and wealth, but soon begin to feel envy of all goods that Psyche has acquired.

They learn about everything that took place and even more the existence of her invisible mate.

They begin to torture her with doubts about his true nature, his purpose and her future with him.

Their pressure makes Psyche believe that she has married an enormous serpent, which will kill her especially

when she will give birth to his child".

Internal conflicts devour Psyche and make her doubt her happiness.

This is a battle between the subconscious and conscious, a battle about Faith.

The subconscious, as an entity, gives its battle to dominate over Good, Innocence and Happiness of Psyche.

"At night, Psyche is waiting for her partner to sleep. No sooner had he slept, than she took

the oil lamp, turned it on and approached it near his face.

To her great surprise, it was not a beast, but the God of Love itself.

Psyche felt to have feelings of love ten times more than before, but a bleak thought had betrayed him! She was holding a knife that fell from her hands.

Eros wakes up and sees Psyche to keep the oil lamp in her hands and feels betrayed.

He is angry by betrayal, and he opens his wings to fly away from her despite her requests.

He flies and she holds on to his leg, in order to fly with him up to Heavens.

Then, she cannot be kept for long and falls back down to Earth. "

This decline to Earth is an ancient archetype, which appears frequently in various works.

Psyche flies up to the sky for a while, searching for the Divine truth and rises back to Earth, continuing her research

and trying to find the origin of Heavens.

She was caught on Eros's leg for a while, where she finds the Spiritual Light, and meets with the plain truth for a while.

The Most Important Thing to Remember ...

But the only true Love, which raises the soul to heavens, is Almighty God!

"Meeting with God is the greatest task and purpose of the Soul. 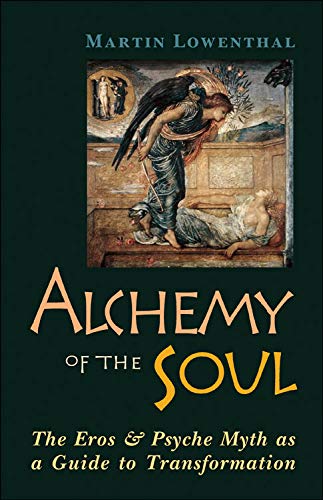 Alchemy of the Soul: The Eros and Psyche Myth As a Guide to Transformation
Life without myth, the vital force of archetypal experiences, is life filled with maladies, neuroses, addictions, and disease. Alchemy of the Soul retells the myth of Eros and Psyche to help readers reconnect mind and relatedness to find wholeness and deep meaning. Author Martin Lowenthal describes how the story of Eros and Psyche illustrates the alchemical process of marrying soul and matter so that life can be lived with more joy, meaning, and a tangible sense of divine love. The book is divided into three parts: * Part 1 is a beautiful retelling of the myth of Eros and Psyche. * Part 2 examines the power of myth and alchemy and shows how spiritual alchemy can restore and transform the soul. * Part 3 is an initiation into the alchemical mysteries using myth as mentor.
Buy Now

When I started writing the newsletter on February 2009, some significant principles were raised concerning the form and content of the text.

My primary thought was to write about "freedom", a concept that preoccupies the entire humanity for millenniums.

How free are we really?

I came to the conclusion that "freedom" is a subjective concept and plainly personal concept for each human being.

Love has always been the main subject of research . That is to say, Love is the vehicle of creativity, a passage of inspiration for all people.

However, Love in Greece is anticipated as a different feature from Eros.

Eros, the little winged God or semi-God, imprisons or re- solutes Psyche, up to a certain point.

I highlight this once again, as it is plainly my personal point of view.

Eros and Psyche , a modern viewpoint could be ...

Informative Sources on Myth of Eros and Psyche

Cupid and Soul on Wikipedia