Why I'm making this page about the Chad Mitchell Trio:

I'm making this page about the Chad Mitchell Trio because, as you may know, I love American folk music, and The Chad Mitchell Trio was another one of the great folk groups of the 60s folk revival in America. They sang both traditional folk songs and political protest folk songs. They were unique in that none of them played instruments and in that they were particularly known for their satirical songs about current events.

I greatly enjoyed hearing them on the radio at that time, and I recently purchased their "Collection" album (featured below) and play it every day. I especially enjoy their version of the spiritual, "You can tell the world."

For a full history of American Folk Music, check out this hub:

Here's one of their spotlight numbers:

Changes and Success of the Trio: - (Info gleaned from Wikipedia)

In March 1962, they did a concert at Greenwich village's Bitter End. The concert was recorded resulting in the album listed below, which showcases the trio at their best -- informal, irreverent, and totally entertaining. Discarding their suits from earlier album covers, they now performed in comfortable sweaters along with their accompanists, future Byrd Jim McGuinn, former Weaver Fred Hellerman and bassist Bill Lee. The audience was more intimate as well, the coffeehouse audience responding more reverently than the raucous, huge crowd on the Mighty Day on Campus album. The trio's choice of material is solid, mixing traditional folk songs arranged by Milt Okun with more contemporary songs written by the likes of Bob Gibson ("You Can Tell the World," "Blues Around My Head") and Tom Paxton ("Come Along Home"). The album starts off with a bang with the ingeniusly wicked "The John Birch Society" and Woody Guthrie's "Great Historical Bum" is preceded by some humorous braggging. 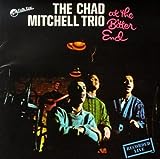 At the Bitter End
Buy Now

Take another listen to the Chad Mitchell Trio:

And listen to this, another humorous number by them:

Reunions of the Chad Mitchell Trio:

[From Wikipedia] in 1987, "The Mitchell/Kobluk/Frazier trio and John Denver reunited... for several concerts, [and PBS] broadcasts.... These are the only recordings of all four members." Read the Wikipedia article 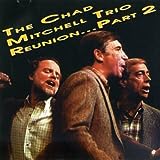 Reunion Part 2
Like its predecessor, the Chad Mitchell Trio's Reunion, Part 2 is drawn from a concert given by Chad Mitchell, Mike Kobluk, and Joe Frazier at the Spirit Square Center for the Arts in Charlotte, N.C., in 1987, their first appearance together since the 1960s. The earlier album, Mighty Day: The Chad Mitchell Trio Reunion, contained performances of most of the trio's better-known songs, but there are a few gems left over, notably a cover of Tom Paxton's "The Marvelous Toy" (a chart hit for the group) and a rendition of the Depression-era standard "Brother, Can You Spare a Dime?," plus a couple of nice surprises: "Barry's Boys," the trio's parody of 1964 right-wing presidential candidate Barry Goldwater, gets updated into a parody of 1987 right-wing President Ronald Reagan in "Ronnie's Boys"; and Bruce Cockburn's "Nicaragua" makes an appropriate and timely (for 1987) addition to the trio's repertoire. As on Mighty Day, former group member John Denver makes a cameo appearance.
Buy Now

Check out My Other Folki Music Hubs:

Finally, get this great collection CD for less on eBay:

As I said, above, I have this CD and play it all the time. It's a great mix of traditional folk and more modern bluesy folk. It also has the humorous "John Birch Society," which is good for a laugh, and, at the other end of the spectrum, the sublime gospel song, "You can tell the world," which I love. They say they love the next song after that one, "The Strangest Dream," and ask the audience to sing along with it, but, the one I really love is "You Can Tell the World," although all of them are great, and it really is a great mix of styles.