Send your baby off to sleep with a glow worm toy

If you are looking for the best glow worm toy for your baby, you will find that there is a really good choice available. You can purchase them in many colours, shapes and sizes and you can do so very easily by looking online. You could order your glow worm toy today and have it delivered to you in no time at all.

Although there are now many versions of this toy, there was an originator. The real way to spell the name for this toy is Glo Worm toy. It was created, designed and manufactured by Hasbro. Hasbro is part of the Playskool family and they are very well known and widely respected as the makers of high quality toys for little children.

The glo worm is a stuffed toy that has a battery powered device inside. When a child squeezes the belly of the toy, it activates the LED light, which switches on to illuminate the face with a soft and gentle glow.

These toys have become very popular with mothers and babies because it has a very soothing effect and helps to send a small child off to sleep due to the reassuring light next to them.

This little glow worm toy not only has a face that will light up with a gentle glow when your child squeezes it, this one also plays a selection of lullaby songs to help send your little one off to sleep.

The Lullaby Gloworm has three different settings for you to choose from. You can leave it with the original setting which means it will light up when squeezed. 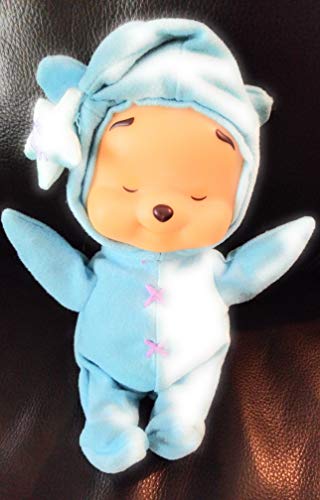 Fisher Price toys have also created a range of glow toys for little children. This one is the night glow pooh, which will certainly be a favorite for those who love the original Winnie the Pooh. This is also a lullaby glow toy which works when the tummy is squeezed.

When you press the tummy, Night glow Pooh’s eyes open and close and there is a choice of up to five different melodies that can be played to send your baby off to sleep. There is an on and off button so you can choose when you would like your child to hear the music or whether you prefer just the soft illumination to be activated.

Night Glow Pooh is also dressed in a very cute little pajama suit and will look adorable in the arms of your baby as he or she drifts off to sleep. This glow toy is suitable for children between 6 to 36 months.

Here is another adorable glow worm toy from the Fisher Price family. This is the Ocean Wonders Soothe & Glow Seahorse. This time when you squeeze or cuddle the tummy of this toy, the belly lights up with a gentle glow and plays music from a variety of musical styles.

There are some lullabies as well as classical selections and, as this is a seahorse, there is music that is reminiscent of the calming sounds of the ocean.

This is the perfect toy to help a child go off to sleep because after a certain amount of time the light fades out and the music also fades out until there is no more light or sound. By this time your child should be deep in slumber. Find out as much as you can and you are sure to pick the best glow worm toy for your child to enjoy.