A Day For Girls And Dolls

The Japanese word for festival is Matsuri.

In Japan a favorite festival for girls is Hina Matsuri.

Hina Matsuri Is held each year on March 3rd. It is also called Momo No Sekku (Peach Festival). This is because of the peach blossom season according to the old lunar calender.

This is the day that is dedicated to peach blossoms. The peach blossom is a symbol for a happy marriage This is at the time between the end of February and beginning of March, when winter is turning to spring. It is also the time when
the peach tree blooms.

This a day to pray for a young girl's growth and happiness.

The Japanese name for a very special set of doll's, that families with girls will bring out and set up on display on March 3rd , Hina Matsuri, girls day or Doll's Festival. They dedicate the peach blossom to to the girls also.

These doll's are valuable, often they are handed down from mother to daughter and therefore are not to be played with.

Usually the mother sets the dolls up for her daughter or daughters. The dolls are always set up in a vary special way.

They are arranged upon a set of shelves that would look much like a series of steps, usually five to seven tiers. The set of shelves would then be covered with red cloth.

The top shelf would be the place of honor. It is on this shelf that the Emperor (Obina) and the Empress (Mebina) would be placed. On the next shelf, below them, is where the members of the royal court would rest. The royal court would consist of first, the three ladies in waiting, (Sannin-Kanjo), the five musicians (Gonin-bayashi), two officials, and the three guardsmen.

Among the dolls, you will find placed tiny pieces of furniture, musical instruments, and decorated boxes.Also among these you would find fresh peach blossoms, food offerings as well as candy in the shape of fruits.

After the celebration, everything is very carefully wrapped up and packed away until the next year. 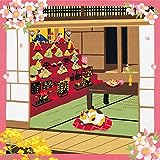 In Japan a favorite festival for girls is Hina Matsuri. Hina Matsuri Is held each year on March 3rd. It is also called Momo No Sekku (Peach Festival). This is because of the peach blossom season according to the old lunar calender.