Satan, (aka the Devil) and Demons

"For God hath not given us the spirit of fear; but of power, and of love, and of a sound mind." 2nd Timothy 1:7

There are many believers who are content to consider Satan, and demons as metaphors; mere representations of the concept of evil. Others are happy believing Satan and demons are useful as scare tactics to encourage children to obey. Still others do not know what they believe.

To Ignore or Not to Ignore, That is the Decision

Ignoring Satan will keep you busy trying to get out of all the trouble he will cause and all of the traps he'll set for you. Satan has no mercy or love for you and will attack you and your children whether you ignore him or not. The sad part is, no matter how you try to ignore him, his works will still cause you problems. No matter how you turn it, if you are born-again, you will have to deal with the works of the devil.

"For we wrestle not against flesh and blood, but against principalities, against powers, against the rulers of the darkness of this world, against spiritual wickedness in high [places]." Ephesians 6:12

Actually, trying to ignore the works of the devil, (Satan) is like trying to ignore your nose. You cannot easily see your nose, but you know that it is there. Likewise you don't always see Satan, but you ought to know that he is always there.Not in the same sense that the Lord is always with us, but in the sense that either Satan or one of his demons is always lurking about, trying to find a weakness in us so he can attack us.

"Be sober, be vigilant; because your adversary the devil, as a roaring lion, walketh about, seeking whom he may devour:" Whom resist stedfast in the faith, knowing that the same afflictions are accomplished in your brethren that are in the world. " 1 Peter 5:8-9

You don't have to go looking for him either. If you are born-again he'll be looking for you! He is after you because he hates Jesus and he hates all those who have made Jesus their Lord. This hatred is so strong it makes the devil work overtime to bring difficulty and trouble in your life.

Now, you can tell yourself there is no devil if you'd like. You can ascribe all of the hard problems in your life to "coincidence" or something other than the work of the devil. It is your choice to believe whether he exists or not. Unfortunately, regardless of what you believe, the fact remains, he and all of his demons are working day and night to attack you.

They want your testimony...they want to make you deny Christ and loose faith in God.

In the art of war, one of the most effective strategies is the use of covert or undercover operations. In other words, if you can invade the enemies territory and no one knows that you are there then you can do a tremendous amount of damage before your presence is detected. Like mold or termites...by the time you realize there is a problem, your whole house is "messed up".

So it is with the strategy of the devil and demons. If they can get you to believe that they do not exist they gain the upper hand. You will continue to count your difficulties and problems as unfortunate circumstances. Or, will believe you are being punished for something you did 15 years ago.

Don't get it wrong. Not everything is inspired by the devil or demons. But a great deal of our problems are. In fact it is safe to say that the vast majority of problems are triggered by demonic influences.

I had a friend who saw a swarm of termites on his property. He called an inspector out to investigate. The result was not pretty. The whole backside of his home had been damaged. The termites had been eating those wood beams for a long time, perhaps years. Mercifully, he saw the swarm wnen he did. That siting was an indication that a problem existed.

That is the way the devil and demons work. They enter into your affairs unnoticed. By the time you notice them they have done major damage in your life.Your physical and mental health, relationships, finances, emotional stability your overall well-being are all targets for the attack of the devil and demons.

The Devil is a Thief and a Liar!

"Ye are of [your] father the devil, and the lusts of your father ye will do. He was a murderer from the beginning, and abode not in the truth, because there is no truth in him. When he speaketh a lie, he speaketh of his own: for he is a liar, and the father of it." John 8:44

That thing, may have been perpetrated by the hand of another person; but, it is likely they were not acting on their own but where directly inspired in their deeds by the devil. Why? What does the devil have against us?

Satan (aka-the devil) once held a wonderful and coveted position in Heaven. He was bearer of praise from the creatures on earth up to God. He was beatiful and full of music. One day, he got full of himself and declared that he would take his throne higher than the throne of almighty God. This is where he messed himself up. He allowed this thought to sit in his mind and develop into a mindset. He began to speak of it and managed to get one-third of the heavenly host to agree with him. Well, this didn't sit well with God, so there was a war in Heaven and Satan and his demons were kicked out of Heaven. Where did they land? You guessed it, right here on Earth.

"Thou hast been in Eden the garden of God; every precious stone [was] thy covering, the sardius, topaz, and the diamond, the beryl, the onyx, and the jasper, the sapphire, the emerald, and the carbuncle, and gold: the workmanship of thy tabrets and of thy pipes was prepared in thee in the day that thou wast created."

Thou [art] the anointed cherub that covereth; and I have set thee [so]: thou wast upon the holy mountain of God; thou hast walked up and down in the midst of the stones of fire. Thou [wast] perfect in thy ways from the day that thou wast created, till iniquity was found in thee.

By the multitude of thy merchandise they have filled the midst of thee with violence, and thou hast sinned: therefore I will cast thee as profane out of the mountain of God: and I will destroy thee, O covering cherub, from the midst of the stones of fire.

Thine heart was lifted up because of thy beauty, thou hast corrupted thy wisdom by reason of thy brightness: I will cast thee to the ground, I will lay thee before kings, that they may behold thee. Ezekiel 28:13-17

Some scholars say that the event in the Bible that changed the earth into a "void place" is the impact of Satan and those demons as they made their crash landing.

How Do They Operate?

Satan and his demons plant thoughts in the minds of men to perform destructive deeds; all for the purpose of causing pain, suffering and agony for others. They point the finger at human beings, at circumstances and situations when in reality the culprit is the devil.

"For we wrestle not against flesh and blood, but against principalities, against powers, against the rulers of the darkness of this world, against spiritual wickedness in high [places]." Ephesians 6:12

Why Shouldn't We Be Afraid?

"And he [Jesus] said unto them, I beheld Satan as lightning fall from heaven. Behold, I give unto you power to tread on serpents and scorpions, and over all the power of the enemy: and nothing shall by any means hurt you." Luke 10:18-19

Jesus went into Hell and defeated the power and authority of the devil. He paid the price for the sin of Adam. His sacrifice paved the way for anyone who receives Him as their personal Lord and Savior. Jesus did this because God truly loves us. Often we don't think we warrent the love, but that is the whole point. He loves us in spite of ourselves. And, because He loves us, He hasgiven us weapons to use against the enemy. We are not powerless!

For though we walk in the flesh, we do not war after the flesh: (For the weapons of our warfare [are] not carnal, but mighty through God to the pulling down of strong holds;) 2 Corithians 10:3-4

When you are in Christ, you have all of the tools you need to live a victorious life. Search the scriptures, for in them you will find everything you need.

We don't need to be afraid, just aware. 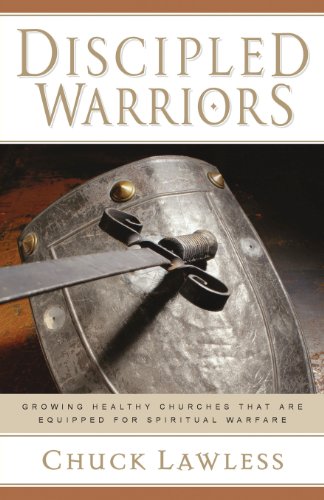 The Invisible War: What Every Believer Needs to Know about Satan, Demons, and Spiritual Warfare
Buy Now