Just a Walk in the Park

A picnic in the park

This simple story is about a leisurely stroll through a park on a sunny afternoon, long ago. There are no fantastic surprises, feats of heroism or amazing twists of fate to describe—at least on the surface. The passage of time, however, turned this casual walk into a mystery. Like so many incidents in our lives, even the most mundane actions can lead to questions about what is real. A logical explanation may suggest itself, but how often are logical answers incorrect?

One cool, crisp day in early autumn when I was approximately eight years old, I accompanied Cathy, the nine-year old girl who lived next door, to a park near our homes. We swung on the swings for awhile, and later sat at a picnic table. A young man approached from the far end of the park. He was tall and thin with long hair, a moustache, and a small beard. He wore a red turtleneck sweater under his jacket. He slowly and cautiously approached us, staring as if he knew us. I noticed his interest and became a bit frightened. I wondered if he intended to harm us because he seemed so focused on our activities, but he never moved toward us—he simply stared with a puzzled expression. His steps were deliberate and he never came too close, obviously not wishing to appear menacing. Cathy said hello, and he smiled and softly returned the greeting. He continued to shake his head with a quizzical look as he passed, as if something about us confused him. Even after he passed he turned back to steal a quick glance at us once or twice before he finally left the park and headed west toward the street.

Learn more about the paranormal and unexplained with materials from Amazon.com

The people and the mysteries

A walk in the park

One sunny afternoon I made my way through the park near my childhood home, heading toward the creek at its west end. Fall was my favorite time of year, and I enjoyed walking in the cool, crisp air. I was struggling with my painting and searching for inspiration. I hoped a walk in this mystique-rich part of East Lawrence would provide what I needed. As I approached the far end of the park I noticed two small children alone in the park sitting at a picnic table together. They were a young boy and girl, close to the same age, and it seemed odd to find them in the park without supervision. I reasoned that they lived nearby and probably could be monitored from their homes. They were totally at ease and seemed comfortable without the protection of adults. I guessed they played in the park a lot. The boy was small with blond hair—the girl was slightly larger and was probably a little older. She had dark eyes and brown hair cropped in a short haircut with bangs. The boy was far more fair-skinned than she was. Their clothes looked very dated, as if they were wearing outfits handed down from older brothers and sisters. They seemed comfortable together, not at all antagonistic as little boys and girls can sometimes be.

As I approached, my presence made them understandably nervous. I didn’t want to scare them, but they looked familiar and I hoped to get close enough to see if I might recognize who they were. When I was perhaps 15-20 feet from them, the girl offered a “hi” in acknowledgment of my presence. I said hello in response and kept walking. I was certain I knew those kids after I passed them, and I looked back several times in an effort to recall where I had seen them before. My backward glances further unnerved them, so I forced myself to face forward. When I arrived at the wooded area it felt uncomfortable to me—almost as if it were unfamiliar. Nothing seemed different, but it didn't feel right. I didn’t want to remain there but knew if I walked past the kids again so quickly it would spook them. I headed west toward the street and out of the park. My artistic inspiration would need to come from another source.

I never determined who the children were, but after a moment I realized why they seemed familiar to me. Those two kids looked very much like my neighbor Cathy and I might have as children. I remembered sitting in the park with Cathy years earlier when a young man walked past us. I was frightened by his presence, and Cathy said hello as he approached. It seemed as if I experienced the same moment in time twice. At the first opportunity, I telephoned my friend Brad and told him what happened. He embraced the fantastic casually and had no difficulty believing I experienced the same event twice as two different people—the child in the 60’s and the adult, fifteen years later. I wasn’t completely convinced, but since it was my own suggestion I couldn’t completely dismiss it.

What was the likelihood of encountering two children in the park that reminded me of myself and Cathy years ago, even to the point of dressing in outfits that seemed out-of-place and dated? Those kids looked so much like us as children it was astonishing. How probable was it that my clothes and facial hair were eerily similar to those of the person we encountered that afternoon in the park as kids? Perhaps more significantly, what did it mean if I experienced the same event twice? What happened? Was I trapped in a time loop and destined to walk through this park endlessly? Did the park seem unusual because I saw it as it was well over a decade ago? What time period did I inhabit at the moment I encountered “myself”—did I sit in the future as a child or walk through the park in the past as an adult? Did the park exist outside a normal time stream, allowing events to occur without the limitations of time as it is commonly perceived?  Will the child I saw as an adult wander through the park himself fifteen years later, only two encounter two eerily familiar kids enjoying a picnic? I even briefly wondered if I encountered my own ghost at different points in time. After all, there was no reason I knew of for a ghost to be bound by linear time or incapable of assuming more than one appearance. My ghost could have been in the park as an adult and a child, but what purpose might my own spirit have in revealing its presence to me?

To ignore the obvious answer that the two occurrences are unrelated means the event I have described is essentially without precedent; it cannot be categorized in any known context of human experience. It is unique and has no niche in which to fall, unless the unexplained is now sufficiently commonplace to be its own niche. If unexplainable mysteries can be accepted as a valid possibility, it seems feasible that I experienced this random event twice, but that raises still more questions I cannot answer; most obvious among them being how and why. My experiences couldn’t be rationalized by Einstein’s theories of time or Stephen Hawking’s arrow-like forward momentum explanations. Asking why this happened was even more baffling—if experiencing this event twice was possible, was it a random event or did it serve a purpose? Was there a reason I was meant to experience this incident from the perspective of two different points in time? Was there a significance that eluded me, no matter how often I pondered its meaning? In my recollection, the day was ordinary in every other way, both as a child and a young adult. Why, then, did this happen?

I have no means to provide the answers to these questions, then or now. I am forced to conclude that nothing unusual happened. Cathy and I probably saw a stranger walk past us in the park years ago. As an adult, I likely approached two small children having a picnic in the park together that reminded me of myself and my neighbor as children. That rationalization makes sense and keeps life tidy and orderly, even if I’m still not completely comfortable with it. I may be forced to accept the ordinary as a final explanation, but I can’t shake the feeling that something more did happen. I can’t let go of the idea that I was in that park twice, even if I can’t explain how or why.

I may never know what happened on the sunny fall afternoon, but I will always wonder if my stroll through the park was something far more significant than I could possibly fathom.

Learn more about the mysteries of time and space with materials from Amazon.com 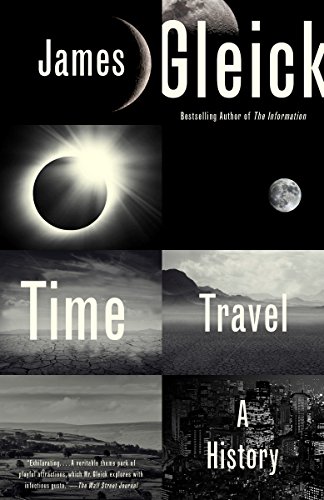