The Day Has Come

Pastor Michael has been in the ministry for 10 years. He currently is pursuing his Master's from Andersonville Theological Seminary.

Are You Discerning the Time?

I have gone over and over in my head what false prophet Harold Camping was trying to accomplish with his end of the world prediction. I have no answers, no clue to this idiocy. I do have a few random thoughts one being he was seeking his own glory. The Apostle Paul wrote to Timothy saying to study to show thyself approved. I seriously think in his 50 years of studying the Bible Mr. Camping missed a few things. How could he purposely overlook Matthew 24:36 and lay claim to knowing when Jesus would return? How could he have been so blind to the True Word of God?

Maybe it was pure greed. After all he did take in a reported $72 million. Did you see the trucks he had? They were awesome, the paint scheme and such. Looking at the trucks they had to be around $100,000 each! We all know that kind of money could have fed many children and needy people. That sum of money could have helped struggling churches pay off a mortgage. That much money could surely wondrously spread the Gospel of Jesus Christ. How could all the people following believe the heresy he spewed from the beginning? Now after three days he has said he miscalculated, and it will be in the fall. Attention Mr. Camping my Bible STILL says no man knows the day or hour that Jesus will appear.

But you the reader when will your day come? You along with millions around the world heard of Jesus coming again. This is true, He will again return to take His people with Him. One day with a shout, with the voice of the archangel and with the trump of God, Jesus will come in the air and call us up that believe in Him. The dead will rise first and those that remain will be called up. When will your day come? See I in no way defend the heresy spread from the mouth of a false prophet, or the ignorance he used in his thoughts. Millions though heard of Jesus coming again and need to find out just what was meant in truth. Millions around the world now are no longer blameless for their own ignorance, they have heard Jesus will return. What will you do in your life now? It is true, I have correctly used the scriptures to explain that point. I used very little, but it is from God's Word in the Spirit of truth. Mr. Camping though wrong did give a glimpse of Jesus to the world. Now your fate of heavenly bliss or the destruction of Hell rests in your hands.

The Word of God says, "It is appointed unto man once to die and after that the judgement. Jesus said, "If I be lifted up, I will draw all men unto Me." This is your drawing; Jesus is before you as you read these words. I by no means am a scholar, but I do know what God's Word proclaims for our salvation. I do know, because I have been there, that all have sinned and come short of the glory of God. I know there is none righteous, no not one. I know the wages of sin is death. I do know that God loves us so much He is not willing that any should perish but that all should come to repentance. I also know this, the Apostle Paul wrote, "But God commendeth His love toward us, in that, while we were yet sinners, Christ died for us."

The day has come for millions who have heard the false prophet prediction, that they are without excuse before God. Their destiny is Heaven or Hell, prayerfully they chose Christ. Mr. Camping is wrong, dead wrong, his day is come to repent before a Holy, Just, Sovereign God. The worldwide audience that heard of Jesus coming their day has come to claim responsibility for the sake of their eternal existence. Though wrongly spoken by Camping, God is going to destroy the earth one day, will you and the millions be ready? You have been alerted to the fact that Jesus is coming again to take His own people home. I am ready, are you?

The day has come and now is the acceptable time to ask Jesus into your life. He will forgiver your sins and be your Saviour. Do not waiver from the Truth of God's Word. Fathers teach your children give them the Gospel with love and understanding. Do not let seducing spirits enter into your home and steal your family. Do not be swayed by the false prophets to come.

The day has come that America my dear homeland repents of her hellish ways and turns back to the One True God. The day has come that we run the apostate out of our churches. Brothers and sisters this is the tough part, if your home church will not run out the apostate teaching and the preacher preaches with itching ears, RUN! It is time for you to get out and find a Bible Preaching Bible Teaching, God honoring Jesus glorified, Spirit filled church.

The Day Has Come.

You need to read this book. 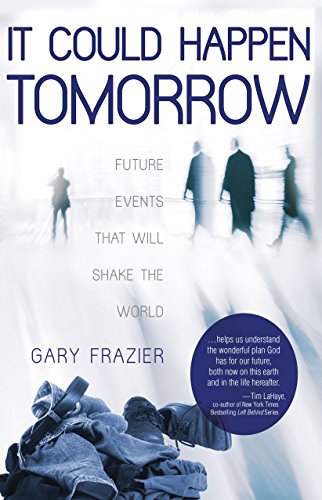 It Could Happen Tomorrow
Buy Now