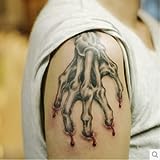 Claw tattoo designs are a niche category that has many adherents and fans, especially among males, who like to express the power associated with the claw in a way that shows them breaking free of and through resistance.

This is usually expressed in a way that has the claw ripping through the flesh in the image, implying a breaking free from self-induced limitations.

Most of the claws used in this art form are from a wild beast or a bird of some sort; usually thought of as eagle talons, although the bird is rarely shown or hinted of, so it's largely a guess and assumption, even though based on a high probability it's true.

As with all the tattoo designs I write about, with claw tattoos we'll look at those of high quality and low, so those considering having a tattoo, especially their first one, will learn to take a variety of factors into account so it doesn't end up in being a disaster.

After all, who wants a bad work of art permanently embedded in their body?

We'll start off our claw tattoo gallery with a look at this unusual lobster claw tattoo. As a standalone image, it's one of very few I found, and the only one that was portrayed as ripping through the skin.

This isn't an attractive personal option for me, but the fact it's rare and uncommon makes it worthwhile seeing, as you never know what may inspire something concerning a tattoo design.

Because I like to write about tattoo designs partially to instruct, I included this ripping flesh lion tattoo to show how things can go horribly wrong.

First of all, if you want a tattoo of a lion showing its strength by ripping through the flesh, the face needs to be one that is fierce and majestic. While the eyes of this lion aren't too bad, the rest of the face looks like it has been botoxed, as there is no emotion or determination shown, just this mouth that doesn't line up with the eyes.

And what about those cheekbones? What is this, a Hollywood lion having just emerged from the makeup trailer? Fail!

When deciding on a claw tattoo, those claws need to be the center of the piece in the sense of being awesome. This set of claws is about as pathetic as you can get, being worse than the face, if that can be believed.

Detail is everything with a quality tattoo, and this one fails miserably because the subject matter demands a higher quality than a tattoo which was meant to give a message or be more of a caricature.

Just to show there is more than one way to design a claw, this tattoo of a hawk gripping a baseball, apparently in the midst of throwing it is pretty cool.

The claws look convincing and the texture of the leg of the hawk is very realistic and praiseworthy. Also well done and almost lost in the image is the baseball itself, specifically the stitching on the ball which conforms with how they really look.

If you like birds, claws and baseball, this is really a good tattoo design to get some ideas from.

With this design we have the first look at the most popular type of claw or talon tattoo design people choose to have inked on them.

I think it's the mystery of what's trying to break out and why that makes this such a popular choice.

This one is actually somewhat benign, as some tattoos of this type can be extraordinarily disturbing, as we'll see in the next one. But for someone wanting something not too shocking, but can still grab the attention of those who see it, this is an example that could work nicely for them.

Here we have a more fierce and extreme tattoo design, with the talons dripping blood and the disturbing eye located on the middle claw.

This obviously isn't a tattoo design for everyone, but it is actually a good job for what it is and represents, with detail that is fine, and an interesting interpretation of the talons of this creature, including the great claws and the thick and hairy talons.

Just like with tribal tattoos, patriotism seems to be able to be incorporated into any tattoo theme, including this interesting one with the claw ripping the flesh to reveal the American flag underneath.

We have no problem identifying the talons of this creature, as it's obviously the bald eagle, based upon the subject matter and relationship to American symbolism, which the bald eagle is such an important part of.

The claws shining and extending from those wonderful talons look very convincing, and project the majesty of the bird and its apparent job of continuing to need to break out for the purpose of pursuing freedom.

We finish this tattoo gallery off with the other ubiquitous tattoo theme: tribal. Tribal, as mentioned above, is probably used in every type of subject matter chosen by tattoo enthusiasts. It is very adaptable and versatile, with few rules other than the easily recognizable lines and shapes, which can be seen in this claw tattoo.

The way the three protruding, pointed lines represent and declare the claws of the theme look fantastic, as does the background and ancillary details which make tribal tattoos look so great.

Claw tattoos aren't for everyone, but neither are any of the themes and subject matter of other tattoos.

They represent a powerful message that we all are trying to break free from the inner things that bind us, and many times we must aggressively combat them to succeed in life individually, and by that release, help others who are struggling in similar ways and walking a difficult path.

Ripping flesh or ripping skin tattoo designs aren't all about being disturbing or gratuitous, but are about individual freedom and liberty expressed through a claw struggling to break through our inner demons to be finally released to have a positive impact on those around us.

In that regard, even though the appearance of some claw or talon tattoos can be extreme, they do send a positive message of not giving up the struggle to be set free.