Halloween is one of the most popular days of the year, generating close to the amount of interest that Christmas brings. That has resulted in a growing interest in tattoo designs associated with the special day.

Tattoos celebrating Halloween spread across the gamut of of themes related to the season, from whimsical to as macabre as the scariest costumes you may have encountered at a Halloween party.

And even the horror series "Halloween" makes an appearance in the tattoo genre, depicting the insane Michael wearing his signature mask.

Along with the obligatory pumpkins, black cats, bats and twisted trees are other themes like Jack Skellington and Freddy, among some other general horror designs.

The reason why these particular characters and images in relationship to Halloween work so well is we never tire of them.

No matter how many times we take in a specific image, it almost always generates a smile or response that delights us all for the scary theme associated with Halloween and that time of the year.

Now let's look at some Halloween tattoos that represent a little bit of everything from the season.

Although Chucky isn't specifically related to Halloween, how could you neglect to have a representation of the evil character, which personifies the dark side of Halloween and how many people view it.

As for the artwork, it's really well done, as you can see, with the trademark coveralls worn by Chucky, and his weapon of choice - the big knife he always seems to get hold of.

Here we have a very traditional set of Halloween characters in a tattoo design, with what appears to be a zombie black cat popping its head out of an evil pumpkin.

Did you notice above the head of the cat is the top of the pumpkin shooting backwards, giving the impression the cat forcefully pushed itself out. Pretty cool. 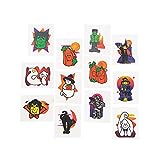 This is a pretty good renditions of a traditional Halloween scene, with the haunted house, bare tree, and pumpkins strewn along the pathway. I do like the way the pumpkin in the foreground gives the design some depth, as does the house in the background.

Now this is a high quality depiction of the mask worn by mass murderer in the Halloween series: Michael Myers.

It's really well done, and the decision to portray it as a half mask was a good one, as it leaves an ominous sense of the broken person he was. The dark, empty eye to match his empty soul catches it perfectly.

This is probably my favorite of all the Halloween tattoo designs I've seen. It captures the essence of the day, while incorporating a number of the characters or images we think of when contemplating the season.

What's amazing to me is how the artist took the black cat, bat, number 13, spider web, Gothic umbrella and witch, and somehow make it all work together. That includes the terrific choice of a dress to have the witch in, which has the hanging pieces from the arm and that interesting, swirling bottom.

It does all of that, and would be an awesome choice for a Halloween tattoo.

In a more whimsical look at Halloween, this tattoo design using a cupcake as the center of the theme looks fantastic.

What's really funny to me is the inclusion of the skull with the blue bow on top of it. It even has what appears to be eyelashes made up to point to it being a girl skull.

The contradictory theme continues with the bats flying around in the midst of a bunch of stars, bones on the cupcake, and the candy corn lying at the bottom of it all.

For what it meant to portray, it's a nice Halloween tattoo for those wanting to present the lighter side of the holiday.

You can see from these Halloween tattoo samples why it's such a compelling and fun way to celebrate the usually scary holiday. There can be a wide array of images based upon your particular tastes and wishes.

They can be cartoonish or show forth some of the darkest evil such as those tattoos with Chucky and Michael Myers do above.

Either way, there is something for everyone and their particular comfort zone with Halloween tattoos, and that makes them a great way to show forth your own way of wanting to express the particular theme of the day; whether it will be light or dark.