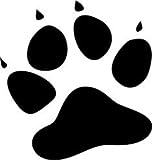 When doing some research on paw print tattoos, I was really surprised at the quality and creativity surrounding the theme, as I wasn't really expecting much.

Not only are there awesome paw print designs that stand on their own, but interesting use of miniature paw prints or tracks to create a look and design of their own.

As for the larger paw tracks, they also have completely different looks, some of which have a scene within the paw print, others with a realistic look, and still others that incorporate tribal and Native American elements into it.

Whatever the desired look, paw print tattoos are a terrific choice for those looking for something different, and relate to the experience of what a paw print represents: an amazing animal that left its only trace in the earth, leaving us to speculate what it looked like and where it was now.

For those raised to enjoy the outdoors, this is something that can easily be related to. And for those that haven't, it's a great way to express what that would be like to those that have never had the opportunity to see an animal track in the wild.

But in the end, paw track tattoos are simply a very cool design, and that's what really matters to those seeking awesome tattoo designs.

This is a very creative tattoo design of a paw print. Not only is the overall look very cool, with the disjointed parts - including the claws. But there are also some images within the individual parts of the paw itself, showing how you can include more than one theme within the paw print design.

To me, that offers some great options and choices for those that enjoy using more than one theme in a tattoo. The shape of most paw prints would be perfect for these type of unique and interesting themes to be included in the overall look of the tattoo.

Here we have another example of including a theme within the paw print. In this case it's related to the paw print theme, as evidenced by the bear and the background wilderness view.

Using the paw print as a canvass itself resulted in a very great tattoo. And it really doesn't take away from the print, as the print attracts the interest and then presents the scene once people look at it. Good effect.

Next are a couple of examples of using paw print tattoos as a design in and of itself. Not only do you have the little paw prints in this case, but they're used in a way to create a secondary design.

The top tattoo is really fun, as it includes the cat head in a way as if it was a cameo or a piece a the end of a necklace, with the paw prints circling around the neck to represent the chain. Really cool effect.

As for the cat face, it is really done well, and is a good focal point to build the tattoo design around.

The paw print tattoo on the foot also looks really nice. In this case it's made to appear like the cat just walked across the area on its way to somewhere else. Nice look. 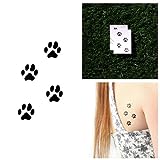 Tribal tattoo designs always add a compelling element to any theme, and that's no different with paw print tattoos, as you can see below.

The dark colors and intricate flow of the lines make this an awesome tattoo. I also like the way there are a lot of circular lines within circular lines, being easily distinguished by the disjointed design, which allows you to appreciate the intricacy involved.

All that leads to the pointed claw which finish off the design.

What is impressive is the choice of colors, which really look good to me. Usually these types of tattoos look far better with the minimalist look than with all sorts of color added.

Also really nice is the shadow included in the image. That and the way the artist made the canvass look like it was stretched out looks great. This is just a great tattoo design going beyond the paw print alone, to create an awesome effect.

Paw print tattoos are a fantastic option for those seeking something unique to have inked on their bodies. They can go anywhere from the wilderness look, all the way to the paw prints of a domestic cat.

Whatever way you may choose to go if you decide on having some paw prints ink, you're sure to be thrilled with the results, as shown by the amazing tattoo designs above.