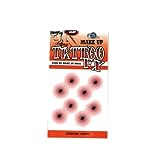 Vampires continue to be a fascinating theme to a lot of people, and as always, if people like something, they end up getting it tattooed on their body if they're into tattooing.

Surprisingly, there are a lot of styles of vampire tattoos, with everything from Hollywood vampires, celebrity vampires, just old evil vampires, to vampire fang bites, which come with dripping blood and everything associated with it.

A lot of the vampire tattoo images, when it's of a vampire head, usually will have the vampire in a state of just finishing a feeding, with the blood dripping down the chin thing going.

I wonder, are all vampires such sloppy eaters? Whatever happened to manners?

Of course a lot of the resurgence in vampire interest comes from the popular Stephenie Meyer Twilight book series, which has become a cult phenomenon for readers, and increasingly for moviegoers.

That has generated TV knockoffs, including True Blood, which is a much darker exploration of the vampire genre, and has its own small, but dedicated following.

An interesting side to vampires is the vampire bat, which is important in vampire lore only because the Dracula story popularized it by Dracula himself turning into a vampire bat and flying around.

Dracula, by the way, is obviously one of the vampire tattoos people enjoy having inked on their bodies.

As you can see with the female vampire tattoos, you can take a simple theme and create a lot of diverse looks, while maintaining the core purpose of the tattoo.

Each one of the above tattoos represent the vampire tattoo nicely, yet look completely different from one another, as do the other vampire tattoos above.

I like the vampire tattoo above because of the caricature qualities of it. Those eyes on the vampire and the victim are great, and I think are hilarious.

The designer of this tattoo had a great sense of hume and style, and it's definitely one of the more unique tattoos I've seen.

I wanted to finish up the vampire tattoo article with this vampire skull tattoo. This is great. Who would have thought of the idea of finding a dead vampire and what it would look like to have a skull of them tattooed on your body. Pretty cool.

As you can see, even though the vampire tattoo theme seems limited, it's only as limited as the imagination of the people designing them, and they've come up with an extraordinary variety of looks within the vampire theme. Pretty cool if you like the idea of a vampire being tattooed on you.