On The Way to Savannah, I Was Distracted By Wild Horses

Georgia is a smaller state of the US South and this allows people to breeze by the seaside towns quickly on the way to other locations. But what travelers might not be aware of are all there is to do on the Georgia Coast. So, while innocently making my way to Savannah, I stopped in the small townships of the coastline... for days.

The first town I came across during my northward trek lies on the southern end of the state. St. Marys, a pictureque small town with bed and breakfasts, leads one to the beginning of the Cumberland Island National Seashore. Cumberland Island is a rarity in that it offers for visitors something not found most other places - wild horses running free. A short and affordable boat ride will take you to the island, where you can learn about the area's history and how the horses came to live there in a protected state. Very close to St. Mary's is a town called Kingsland. In Kingsland, one will find many more budget-friendly lodging choices to chose from.

A Segment on Cumberland Island

In St. Simons Island, the beaches are accessible, free, and well situated for the walker, jogger, or driver. On the way to the beachfront, small outposts sell boogie boards and swim toys. Driving into the free parking, a playground sits at the main entrance, in addition to separate male and female bathrooms and shower stations standing closer to the sand. At least one mobile concessionary sells funnel cakes for the hungry traveler in the same beach-side playground. There are shaded picnic tables to eat at, when one needs a break from the surf and sun, located under the playground's canopy of mature trees. Well-paved sidewalks, located opposite the beach parking lot, accessorized by long lengths of low green shrubbery wait for joggers and walkers. It's refreshing to find a place where one can park and play outside the waves, as well as within them.

Sweet Sounds and Sites of Savannah

The click-clop of horse hooves will greet you in the historical district of Savannah as tour operators navigate their carriages and take visitors to the sounds and sites of Savannah. An architecturally beautiful city, one native sums up the reason Savannah never changed after the Civil War, as other towns did, with the downturn in the economy. As she put it, Savannah residents were "too proud to whitewash and too poor to paint" their homes. So, Savannah didn't change and, as a result, we are able to step back in time to enjoy the elegance and architectural grace of a bygone period in time.

A major waterway city, Savannah also offers guided trips to see the dolphins at play in their home waters off Georgia. One vendor takes those evening adventurers out by moonlight in kayaks. Another vendor offers a tamer water way experience aboard the River Street Riverboat. For the true landlubber, a riverwalk experience will take you through cobblestone led paths laid by slaves. Slaves were brought to this area to harvest rice and an auction block on Bay Street is where slaves were sold. During the Civil War, Savannah fell to Sherman. As most historians will verify, Sherman wasn't as bad as Southerners would like to believe and he didn't burn Savannah. Even though the retelling of Savannah's true history is limited in its accuracy and mostly leaves out slavery on its plaques and signage, one may still find informative historical tours that share the accounts of the home owners of the area during the Civil War era.

A Humorous Virtual Homage of Savannah!

A Beautiful Cathedral Unlike Others - St. John The Baptist

Living Beaches of Georgia and the Carolinas
Buy Now

A visit to Georgia will find some racism still alive but not overt. I imagine, as the older generation passes away, this problem to diminish. However, most people are kind and friendly. There is a perception by some people in Georgia that Latinos are illegal Mexicans. As a Latino, I was most often asked, nicely but with a concerned look if I am Mexican (I am not). Some did not know the difference between a Latino and a Mexican person when speaking to me and I found myself in the unusual situation of having to explain how it is that I am Latino while not being Mexican. It's my understanding from local residents that some legal status Latinos can be detained by ICE (Immigration and Customs Enforcement) for fishing without a license! This sounds like a law enforcement problem that (we hope) is being corrected. In speaking to some African-Americans, they also said they experience racism while living in Georgia and are considering moving away so their young children can grow up in a more open-minded environment.

I didn't personally feel that racism in Georgia is so overwhelming that one cannot grow up there and enjoy a healthy upbringing but one woman said when she was among her African-American friends, if a white officer was near, her friends still bend down a bit to "turn their eyes to the ground" and that she found that a callback to the times of her youth in the 1960s, when it was dangerous to look directly at a white person's eyes because it might have been perceived as disrespectful and deserving of some type of consequence.

In my limited visit to Georgia, I found that the state, cities, and towns are beautiful and nearly all people were welcoming of me and my family but based on speaking with actual residents, you can be forewarned there is a general feeling among the locals that the wheels of change turn slowly in the South when it comes to race relations. I would not consider that reason enough to not visit the great state of Georgia, as it is richly steeped in history, traditional hospitality, and charming indulgences not found elsewhere, such as boiled peanuts and Sweet Grass basket-making (handed down generation by generation from the days of slavery).

Where Georgia Is On The Map 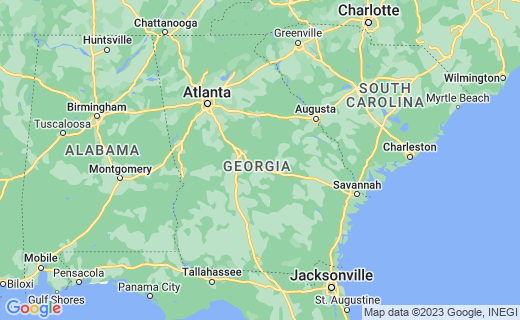 Did You Find This Article "Georgia: Quiet Seaside Retreats" Helpful?