When people think of the angel of death, it usually conjures up thoughts of images of the Grim Reaper we're all so familiar with. While that is still true, there are a variety of ways we imagine the moment of death and the role angels may play in that, and that's expressed nicely in many ways with tattoos of the angel of death.

It seems the determination as to what the angel of death looks like to the tattoo artist or recipient of the tattoo is first, the worldview of they hold. Does the person believe in an afterlife? Are there evil versus good angels, and finally, are their rewards and consequences for how we live our lives in this world.

All of those are included in how the angel of death is perceived, and ultimately, depicted as a work of art.

Either way, there is a wide variety of very compelling angel of death tattoo designs revealing something of the underlying beliefs and outlook on life the person desiring the tattoo holds. 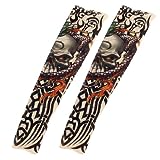 So in regard to tattoo designs of the angel of death, there are many diverse interpretations across the spectrum of how people view life and death.

That said, it does appear that those having these angel of death tattoos do believe in life after death in some way, as the very fact there is an angel being designed that is considered to be a gatherer of souls attests to that belief.

Now let's look at several angel of death tattoos and how they were imagined.

In this first tattoo design of the angel of death, we have an image of what most people think of when they contemplate on such things. The hooded skull seemingly peering out at you with the cavernous eyes represents that interpretation in our minds, and the ripped skin just adds to the look and feel of that.

Now we encounter the full look of the angel of death in this tattoo design. The scythe is a major part of that imagery, as no respectable Grim Reaper would be without it, as it's considered the dark angel's tool to harvest souls.

What is very interesting about this particular angel of death is he's being portrayed as the one battling Christ on the cross, who is in the midst of the thieves.

Angel of Death Tattoo with Child

In this depiction of the angel of death we have the angel being compassionate and comforting to the child which has apparently just died. The offering of the rose is a nice touch. Here you don't have the sense of foreboding encountered in other angel of death scenes.

Again we see a compassionate interpretation of the angel of death, who is seen to be weeping over the loss of the pure souls, as represented by the skulls underneath what appears to be an altar.

If I recognize the source of this tattoo design, it's from the Bible in the book of Revelation, where the faithful that had been beheaded for believing in Christ were found crying out under the altar for justice.

This tattoo of the death angel holding what seems to be a crown of red roses, looks to be ready to reward the recipient of the crown who must be about to appear before the angel.

This is a unique tattoo design in regard to the Gothic look of the angel, as evidenced by the wearing of the corset. Somehow it works. Also the apparent weeping of tears of blood adds to the Gothic feel.

Death Angel Tattoo on Back

When looking at this particular death angel, I find her to be somewhere in the middle of good and evil, or dark and light. The look on her face is amazing, and while not reassuring, does seem to be more than disinterested in what is happening; contrary to depictions of the Grim Reaper with whom it seem to be all in a days' work for him.

What really catches my eye with this death angel, is the design itself, especially the wings, which are done awesomely. To me these wings are just about as good as it gets in the genre we're exploring together.

And that heart in the middle of her eyes, what does that mean? I don't know, but it looks fantastic. Overall, when you add the look on her face, the wings, and the way her clothing blends together with it all, it's an amazing death angel tattoo.

My only complaint and observation is the odd look of the hand that shows. It looks out of proportion and a little mannish for the image. But otherwise a great tattoo.

I was very impressed with the decisions by those involved to display the death angel in such a variety of ways. It was good to see how all of us view life so differently as expressed through the art, which was extracted and inspired from the way we view life and its end.