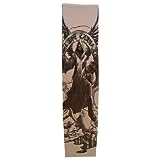 Fallen angel tattoos have basically two different ways of being expressed. First, there is the fallen angels that has no care about the circumstances they find themselves in, and, according to Christian belief, were cast out of heaven because of rebellion against God.

The second fallen angel motif is one that depicts an angel as being in a fallen state and in regret or sorrow over the situation they face. Usually this is the artist identifying the angel with the fallen and weak state of human beings.

What is implied is someone made a bad decision they're extremely sorry for, but which the consequences are enormous for them and all it had an impact on.

The idea is whatever it is that happened profoundly changed the life they had been living, and it will no longer be the same for them again.

In this article we're going to look solely at tattoo art expressing those fallen angels who are regretful over whatever it is that has happened.

They're so powerful in the impact they have, that I thought it would be disruptive to the tattoo gallery to have the other side of the fallen angel equation included, as they portray a more sinister being with a totally different response to what has happened to them.

They clash in impact and effect to me, and so I separated the two so the one theme can be followed and enjoyed.

This first fallen angel tattoo appears to represent the angel after it has just fallen, and is descending out of its former high place.

The scattered feather and sword pointing down implies the angel had lost in its battle against those it had opposed, and thus was banished.

Now I could be wrong with this particular angel tattoo, as my impression is it is also being cast out of heaven as it looks in anguish upwards to his former estate.

It could mean something else, such as an angel worshipping Jesus, but the overall design and look on the face implies anguish and regret, and not a worshipful attitude.

The actual angel tattoo design is magnificent. The detail is extraordinary, and would be very difficult to design.

When I first glanced at this tattoo I didn't notice the lamp near the bottom, as it doesn't fit anything I believe or have read about angels. Having looked at it, it seems the angel's punishment for its fall is to be cast into the lamp. Interesting interpretation of the topic.

This tattoo design was also of very high quality.

This is a brilliant depiction of a fallen angel anguishing over where it has fallen from and has found itself. The shadow and dark lines are amazing, and the face displays with a lot of impact and effect what these angels must have felt when they fell.

It of course reveals the response to terrible decisions and circumstances human beings find themselves in. Powerful image.

Even though this may not be the highest quality fallen angel design, the artist perfectly captures the essence of what is being felt as the being hangs its head in sorrow over its bent arm which is resting on its knee.

The fallen feathers lying around it suggest a life that is falling apart and in shambles.

Again we have a great tattoo expressing the fallen state of the angel. The bending over on both legs seems to imply the sense or feeling of lost hope.

What also impresses me with this fallen angel tattoo is the way you can see the musculature of the being. While it had little to do with what is being communicated, I still like good art, and that's pretty impressive for a tattoo design.

While this particular tattoo has its design problems, for example, the disproportionate size of the hands when measured against one another, it still is very powerful in what it is attempting to say.

The unkempt look of the angel's hair, and the way its hand is lying on its head in apparent disbelief over what has happened, is captured nicely. The dark lines are also nice.

I do wish the artist would have shown more of the face and how it looked with the outward posture of the body being so effective.

Fallen Angel Tattoos and Their Effect

Probably because the vast majority of us can relate to situations which have caused us much sorrow, and even more so when the circumstances are self-inflicted, there is a lot of passion and inner response when you view these fallen angel tattoo designs.

You have the early angels who are in the midst of falling, and the latter angels in response to the consequences of their actions. They speak not only to angelic matters, but matters of the human heart and experience.