Blacktron Was First Released In 1987

This was the first ever "named" space theme to be released by the Lego Group. Although "Classic Space" existed before, it was not a named theme. The Blacktron theme featured black with yellow trim, and red and yellow transparent pieces. The minifigures sported black jumpsuits quite like the real military pilots of today.

Blacktron Lego was a huge advance on the design of Lego Classic Space sets and is widely accepted to be the "bad guys" of the two themes. Within the theme exists a large spacecraft called the Renegade, which set the foundation of all future big Lego Ships that split into smaller segments, including a container for smaller ground vehicles.

These segments could be reused not just with each other, but could also be combined with modules from the rest of vehicles within the theme too, especially the Blacktron Invader and the Battrax. This unique interchangeability with Legos has been a staple of LEGO Space Sets ever since.

Lego Blacktron in reality should be called Blacktron I and is often referred to as such by fans because the LEGO GROUP released a sub-theme called Blacktron II (or Future Generation) in 1991. The Lego Group officially ceased manufacturing the theme in 1988, but the Blacktron Meteor Monitor was then released in 1990.

Vote for your favorite Blacktron set - Available on Amazon

Considering Future Generation's slightly different color appearance, the Meteor Monitor could be considered as being an upgrade from the Original Lego Blacktron Era which only lasted a year. The Blacktron minifigures also featured as prisoners in the Lego Space Police I sets.

KC45 Blacktron I Key Chain (?), a key chain of a Blacktron Astronaut

Below Are The Newer Updated Lego Space Police Sets 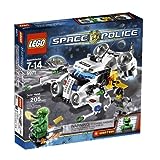 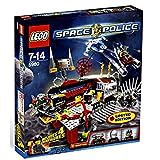 Written by us for your reading pleasure

LEGO Instructions: for new and old LEGO sets and even custom models

Ninja LEGO is Back! NINJAGO

LEGO Lava Dragon: Can Your Knight Win This Lego Game?

LEGO Monster 4: A Legos Game to Build, Play and Change

LEGO Pirates of the Caribbean

Buy Bulk LEGOS by the Pound