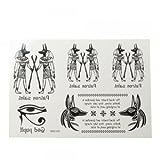 Even though they are an acquired taste and you have to really enjoy the subject matter, Egyptian tattoos, because of the ancient culture, offer up some fascinating images to be used as inspiration for tattoo designs.

There is important subject matter like the cat in Egyptian life, pharaohs, Isis, the eye of Isis, hieroglyphs, among many of the symbols and mythology attached to the culture that are fantastic subject matter, as far as what they look like, and in some cases, represent.

As to placement on the body, there really were no favorites, as it depended on the design someone chose.

Some people had Egyptian tattoos on their back, chest or stomach, and others on their arms and legs.

Either way, the images are unique and interesting. Whether you believe in what they represent or not, they are a subject that attracts a lot of attention because they aren't something you see every day; at least in Western countries.

Cats were a huge part of Egyptian culture, and consequently, by extension, a big part of Egyptian tattoo design as well. The design itself is fantastic and offers unique opportunities for those looking for something different to ink on their body.

While simple in design, the images included with the tattoo below are a snapshot of the ancient Egyptian culture. Nicely done.

The figure in the middle of the hieroglyphs is the mythological guardian of the dead. If nothing else it's a very cool-looking image which draws attention to itself.

Egyptian Guardian of the Dead Tattoo

This is probably my favorite of the Egyptian tattoos, as it seems to capture what one would imagine a guardian of the dead would look like. Amazing design.

Guardian of the Dead Head Tattoo

Isis was worshipped as a goddess in ancient Egypt, but also had a significant following and many believers spread across the Greco-Roman world as well. The tattoo has beautiful colors.

The imagery and design is extraordinary below. I like the dark color on the guardians of the dead, and what appears to be light emanating from the "Eye of Horus" at the top if the design. Fantastic.

I won't go over Egyptian meaning again with the tattoo below. I just like it for its overall image, design lines.

The meaning of the symbol in the middle of the tattoo is the ankh, or otherwise known as the "key of life." It's still important to people today, and is seen in numerous places. The detail of the tattoo is amazing and full of meaning.

Another unique tattoo design. The eye is called the "Eye of Horus," and the other figures are also important in the ancient life of the everyday Egyptian. They are just cool as designs aside from any meanings someone may attach to them.

One of the things I discovered with Egyptian tattoos, as you can probably gather from the comments I made, is there is so much meaning behind the symbols that a book could have been written about them just to have an understanding of them.

That may appeal to some people, but for those interested in unique tattoos and standing out in the crowd, Egyptian tattoos offer something very few other inspiration does for art and tattoos.

The subject matter, as seen above, adds some very compelling designs and images which are attractive to many seeking out a way to express themselves.