Below are photos of these awesome animals. 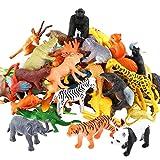 Startling animals' tricks and antics that guarantee them the survival of their respective specie.

Each kind of animal has their own unique way of surviving the wild. Time and time again their adaptation skills continues to fascinates us humans, they are capable of defying odds and can thrive in any part of our planet - land, ocean, and air - and in almost in any conditions. Either in the coldest part of our world to the hottest places, animals with the special adaptation skills and stealth will persists the elements and will find their way to beat the extremes and odds. Their behavior however was sometimes filled with brilliance, but oftentimes unforgiving, but still that's the way nature works. It's a jungle out there literally, predator preying on the smaller animal, and predator sometimes becomes a prey. There's no guarantee of living another day. To ensure that each specie will survive, all of them are armed with special defense mechanisms and attacking skills, for each of these animals whether they are on top of the food chain or not they have a vital role to play, that is, to ensure the balance of nature. Here are some animals with remarkable behaviors.

Some are Born Smarter Than Others

Cockatoo is perhaps one of the most cleverest animal in the world. These cousins of parrots are indeed sloppy and they doesn't know parenting at all. They will put their egg in other bird's nest, and let the unsuspecting birds do the parenting chores. The cockatoo egg hatches faster than any other birds' eggs. Upon hatching, the baby cockatoo will drop the bird's eggs, using his back, he'll muster enough strength to push the bird's eggs down to the ground. This will ensure him that he will get the full attention of her step parents, wakikik, and getting rid of competition. As soon as the eggs vanished, the baby cockatoo is a tough bird to please, and what he want is to get pampered all the time. His poor parents, however, will hunt for food as hard as they could, to satisfy his large appetite. He will eventually outgrow his step parents as he will force them to gather food as much they can and the misery of the birds will end after the baby cockatoo is good enough to fly and hunt food on his own. What a luck.

Considered as the most intelligent of all invertebrates, the octopus is loaded with tough defensive mechanisms to thwart predators and uncanny attacking skills to get his food. The octopus' latest weapon on his already formidable arsenal was discovered just few years ago by marine scientists. The octopus will bluff his way trying to look very large, standing on his tentacles and expanding as much as he can, a trick felines also does when threatened. If this was'nt enough, he'll use another defensive skill like spraying inks on predators to create confusion and propel his disappearance act ala Houdini. If this will not work, still, the octopus can play hide and seek since their elastic body gives them the ability to hide underneath the rock crevices and corals to seek refuge. The octopus also uses this ability to hunt hiding crustaceans, lobster and small fishes. The octopus will not hesitate to give one of his tentacles to predators free of charge, when one of his arms is attacked or get bitten. Its better to lose a limb than to lose a head is octopus battle cry to remain alive. His ability to camouflage in span of seconds makes him almost invincible in attacking unsuspecting prey for a mouthwatering meal. This ability also makes the octopus difficult to be recognize by the watchful eyes of patrolling predators. The octopus is a ferocious predator as well with his eight arms packed with suckers, any prey that he cornered has very slim chance of escaping and being eaten like a sushi or sashimi, which is indeed a treat.

The More the Merrier

Some species of fishes (Tunas, Snappers, Sea Bass and the likes.) and land animals employs safety in number principle. This will ensure them the survival of their kind when attacked by hungry predators, because there will be always survivors when they are threatened and hunted. With this system every males in the group will be given the chance to be a boy next door to potential girlfriends, or should I say mates for future offspring to materialize, thus the cycle of guaranteeing the survival of their specie will be sealed. This strategy is also utilized by land animals as well, like impalas, zebras, antelopes, and more.

Some migratory and wild birds (wild ducks, and herons to name a few) forms a V formation as they take their flight to move from one place to the other. They don't do this to impress us humans, nyahahaha, but for a good reason. They do this because it gives them the much needed position to lessen the impact of air resistance for them to travel faster and to save precious energy. The front of the formation have more difficult time doing his role of overcoming air resistance and when one of those front runners got tired someone in the back will relieve him immediately, a showcase of teamwork that works very well and efficiently.

Born for the Kill

The American Bald Eagle is perhaps one of the ultimate predators and they are also merciless. Why? After few days from hatching the strongest of the eaglets that hatches will let his killer instinct get rid of his brother or sister, as he pushes them down to the ground, with sheer strength and might. In their very young age, they are indeed built for the kill and even his siblings is not spared from this greedy yet essential behavior. This is nature's way of safeguarding herself, If the eagles population is not controlled this will cause an imbalance in the cycle.

Ways to Bury Your Pets

Foods that Should Not be Offered to Pets (Rabbits, Hamsters or Birds)

The Foods Your Dogs Shall Not Eat

How to Look for a Dependable Veterinarian

Flora and Fauna in the Philippines

The Conservation of the World's Rarest Bird of Prey, the Philippine Eagle

The Natural Wonders, Wealth and Sceneries of Amazing Philippines

Pamilacan Bohol a Breeding Ground for the Charming Dolphins